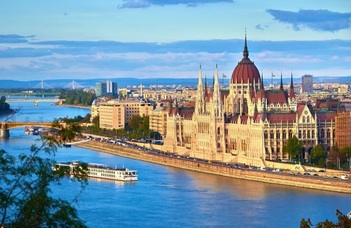 Budapest is often called the "Pearl of the Danube", and it truly is a stunningly beautiful place. Geography, history and human creativity have all contributed to create a city that simultaneously charms, amazes and fascinates. Here we collected some useful information about the famous sights of the city. For further information go to the website of the Hungarian Tourism Agency or visit one of Tourinform offices (e.g. Tourinform Center close to Deák Ferenc Square, address: 1052 Budapest, Sütő utca 2), where you can pick up free brochures, sell maps and guidebooks.

The Castle Hill, which includes the Royal Palace, the Fishermen’s Bastion and Matthias Church, is easily visible from everywhere in Budapest. Exploring beautiful buildings and cobblestone streets in the Castle District can take an entire day, but it is time well spent. The Royal Palace, rebuilt in neoclassical style after the Allied bombings during World War Two to evoke the baroque and neo-baroque palace that was built in the place of the once famous Medieval palace, is home to the Hungarian National Gallery, the Budapest History Museum and the National Library. Fishermen’s Bastion is one of the most fascinating sights on Castle Hill. Although fi shermen from Watertown (Víziváros) reputedly defended this part of the city during the Middle Ages, Fishermen’s Bastion was built in the 1890s forpurely decorative purposes.

The Chain Bridge was the first bridge to permanently connect Buda and Pest. At the time of its completion, Chain Bridge was considered to be one of the wonders of the world. Crossing the bridge is just a short walk, and no matter which direction you go, the view is beautiful.

The Opera House is not only one of the most signifi cant art relics of Budapest, but also the symbol of the Hungarian operatic tradition. Designed by Miklós Ybl, a major fi gure of 19th century Hungarian architecture, the construction lived up to the highest expectations. Ornamentation included paintings and sculptures by leading fi gures of Hungarian art of the time: Károly Lotz, Bertalan Székely, Mór Than and Alajos Stróbl. Many important artists were guests here including Gustav Mahler, the composer who directed the institution from 1887 to 1891 and who founded the international prestige of the institution.

Heroes’ Square is the largest and most impressive square of the city. The Millennium Monument standing in the middle of the square was erected in 1896 to commemorate the 1000th anniversary of the Magyars’ arrival to the Carpathian Basin. The Museum of Fine Arts is located on the northern side of the square; due to reconstruction works, it is closed to the public until spring 2018 The Kunsthalle (Hall of Art), an exhibition hall for contemporary art, is on the southern side. The City Park, which is just behind the square, provides a great escape from the bustle of the city. The 1896 Millennium Celebrations took place here, leaving many attractions behind. Vajdahunyad Castle was built to show the various architectural styles of Hungary, and has Romanesque, Gothic, Renaissance and baroque parts. There is a boating lake next to the castle, which is turned into an ice skating rink in the winter.

Margaret Island now serves as a recreational park in the centre of the Danube River. It is a great place to walk, swim a few laps or go for a run. During summer months, bicycles are also available for rent. Since vehicles are prohibited, the island is a fantastic escape from the city’s traffic.

The spectacular Central Market Hall is a good source of Hungarian products. You can also make it a pitstop for a quick bite of traditional Hungarian food when touring the city. Shop with the locals for meat cheese, fruits, vegetables, and pastries.

This elegant avenue, recognised as a World Heritage Site, is often referred to as the Champs-Elysées of Budapest. It is also called a cultural avenue, as the Opera House, the best theatres in Pest, the Liszt Ferenc Academy of Music and many museums are located on the avenue or nearby.

‘Váci utca’ is perhaps the most famous street in Budapest. It runs from Vörösmarty Square to the Central Market Hall and features a large number of restaurants, shops and cafés. Vörösmarty Square, located in the heart of Budapest is always busy. This is where the famous Gerbeaud Café as well as the first station of the Millennium Underground can be found.

The Hungarian National Assembly (the House of Parliament)

The Parliament building, a magnificent example of Neo-Gothic architecture, is just over 100 years old. It’s the third largest Parliament building in the world and is also home to the Hungarian Crown Jewels. Guided tours start from the Visitor Centre, located next to the northern façade of the building (open daily from 8am to 4/6pm depending on the season). Visits to the House of Parliament are restricted during weeks in which the National Assembly holds its plenary sittings.