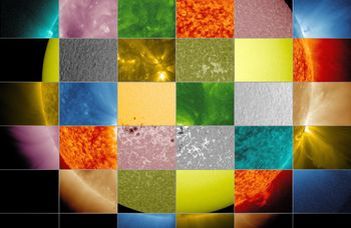 The conference’s theme is solar physics in all its aspects. Solar physics is important because the Sun has an influence on our society that can hardly be overestimated. You might even say that the Sun is the single most important astrophysical object to study. Several ESPM-15 sessions, in particular, are devoted to the modelling of solar coronal mass ejections that are gigantic magnetic eruptions generated in the atmosphere of the Sun. The study of these ejections is important, because they can be potentially harmful for our power grid, communications, GPS satellites and other modern technology sectors.

Several new discoveries will be announced during the conference. Julia Chifu (MPS, Germany) has developed a new modelling technique to reconstruct the magnetic field in the solar atmosphere. She says:

Given the huge impact of the solar magnetic field (editor: for the coronal mass ejections), it would be vital to know its continuously changing configuration. We have recently succeeded to combine the traditional extrapolation calculation with the information from simultaneously observed tubes so that a more consistent magnetic field model may emerge.

Paulo Simões (University of Glasgow, UK) has discovered how solar eruptions emit in infrared wavelengths, as well. His team has constructed 12 different models, all of which converging in that infrared light comes from pretty low in the atmosphere. They are confident that their models are correct and can be used to better understand how the solar eruption energy dissipates in a lower atmosphere.

Miroslav Bárta (Academy of Sciences of the Czech Republic) and co-workers have programmed a new method for numerical simulations. This was necessary to model accurately the launching mechanism of the ejections. He compares his exciting results with water turbulence:

Also in the case of the low-resistivity solar plasma we need some mechanism of fragmentation of the electric current structure to smaller pieces. And – in analogy with water turbulence – this fragmentation has been found to be mediated by spontaneous formation of a cascade of helices of magnetic field that are known as plasmoids – they play the same role as turbulent eddies known from the classical fluid turbulence”.

Solar Orbiter is the next ESA mission dedicated to Solar and Heliospheric Physics and (...) is scheduled for launch in February 2019. During ESPM-15 we will introduce Solar Orbiter’s Science Activity Plan (SAP): a strategic, top-level view of the optimal opportunities for science observations across the 10-years mission lifetime.

Shahin Jafarzadeh (University of Oslo, Norway) has used the SUNRISE balloon-borne telescope to study the Sun’s lower atmosphere. He has discovered that low-lying magnetic fibrils play an important role in heating the atmosphere, because these fibrils are highways for wave energy to propagate to higher layers in the solar atmosphere.

To learn more about the new discoveries announced during the conference please see the abstracts below: