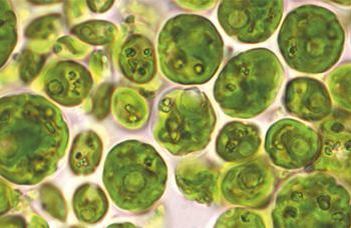 HU
A hitherto unknown, new green algal species has been discovered in Lake Kőhegyi in Szentendre. Scientists of the Department of Microbiology and the Department of Plant Anatomy at the ELTE Faculty of Sciences, Institute of Biology, as well as staff members of Albitech Ltd., in cooperation with the Institute of Aquatic Ecology at ELKH Centre for Ecological Research published their article in the European Journal of Phycology about the discovery of a new species of microscopic scale, which was named Chlorococcum szentendrense after its place of discovery.

When considering the species diversity of the living world or the hidden, unknown, and potentially endangered diversity, we rarely think of microscopic organisms. However, according to the estimates by some researchers, we only have infromation about 10,000 species of the 300,000 – and according to others, as many as 700,000 – so-called microalgal species, microscopic photosynthetic organisms, living on Earth.

“These numbers are astounding, as based on the rapid development of science and DNA sequencing methods of samples collected from the environment, one would assume that the identification of individual species is easier than this, and it has largely been carried out over the past decades,” said József Kutasi, honorary associate professor and research manager at Albitech Ltd. “At the same time, for the scientific description of a species, it is not enough to discover and analyse its DNA that is present in the environment. It is also essential that a pure culture of the new species – uncontaminated by other species – can be maintained under laboratory conditions. This critical step was made by Erika Greipel in our laboratory, and then, the culture received in this way was subjected to DNA analyses as well as detailed light microscopy, electron microscopy, and other tests at ELTE.”

Cultivating algal cultures is not an easy task. What is more, in many cases, the same species is isolated and described simultaneously by researchers in various parts of the world, and then, named in different ways. Therefore, the nomenclature and taxonomy of microscopic algae is extremely complex. Similar to herbarium sample specimens, freeze-dried (lyophilised), and live, pure cultures of every new algal species must be submitted to culture collections so that other researchers can use and study them in the future.

Green algae belonging to the genus Chlorococcum living in the seasonal Lake Kőhegy in Szentendre are still relatively large, so their cells can be observed in the form of small green spheres even under a light microscope. However, Tamás Felföldi and Katalin Solymosi have previously worked together on the characterisation of even smaller picoalgae, whose cells are less than two micrometres (that is, approximately a thousandth of the millimetre). Together with Boglárka Somogyi and Lajos Vörös, researchers at the ELKH Balaton Limnological Research Institute, they described a new species of picoalgae and, at the same time, a new genus (Chloroparva pannonica gen. et sp. nov.) discovered in the sodic lakes. Additionally, they also helped to solve a complicated problem related to the nomenclature and taxonomy of another genus and species (Pseudochloris wilhelmii gen. et sp. nov.).

In the case of such small-sized algae, there is hardly any perceptible morphological mark. In many cases, sexual reproduction cannot necessarily be observed, either. So, the species can only be differentiated from one another based on such things as the pattern, layers, and nanometre variations in the thickness of the cell walls, the internal structure of the plastids, and the presence or absence of flagella. These detailed ultrastructural explorations cannot be performed with a light microscope. They require transmission electron microscopic analyses, which were performed by Katalin Solymosi.

The electron microscopic image of the Chlorococcum szentendrense (by Katalin Solymosi)

“It was not only the new species of the genus Chlorococcum also living on the soil surface that could be isolated from Lake Kőhegyi, but in the case of the two other isolated algal strains, it was not possible to describe a new species due to taxonomic and nomenclature problems,” Tamás Felföldi talked about the difficulties of the research. “The description and classification of these are made practically impossible by the fact that, in the case of one of them, the algal culture considered to be the closest relative or the same species on the basis of its DNA sequence died out from the culture collection a few years ago, so we simply have nothing to compare the new isolates with.”

From the above, it can be probably seen that the exploration of the hidden diversity and species richness of microalgae is a huge challenge for researchers. It is worth mentioning, though, that most of the species described in this way may also be important to examine from the aspect of biochemistry or other applied research, as well. However, in many cases, there is not enough financial capacity or human resources for this. Many species of microalgae contain compounds that are important for medicine and industry, so it is plausible that the recently described species may also have such application potential for the future. One of the major benefits of work similar to the current investigation is that the research team primarily focusing on basic research at the university has direct contact with the industrial partner, so, hopefully, there will also be capacity for further studies on the industrial applicability of the new algal species.

This article was published in Hungarian in the 2022/26 issue of the journal Élet és Tudomány.