A new window to the universe 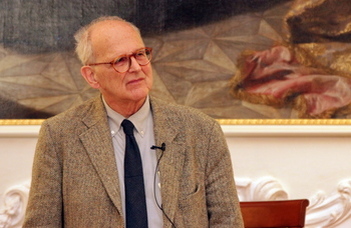 The Senate of the Eötvös Loránd University awarded Rainer Weiss, Professor Emeritus of the Massachusetts Institute of Technology, the title of Doctor et Professor Honoris Causa on 9 November 2018. The Nobel laureate astrophysicist was invited to Budapest by Zsolt Frei, Director of the ELTE Institute of Physics. He delivered his lecture titled “The Beginnings of Gravitational Wave Astronomy” at the Hungarian Academy of Sciences, and also met students of physics at the ELTE Lágymányos Campus.

Rainer Weiss observed as early 1972 that laser interferometers should be used for the detection of gravitational waves. Until then, physicists tried using so-called “mass resonators” to detect waves; however, the sensitivity of the instruments could not be increased to the necessary level. Interferometers with long arms proved to be better solution. Weiss participated in designing and constructing the LIGO instruments. Since 2000, he has also been involved in their operation and development.

The 2015 observation of gravitational waves by LIGO topped off his life work. For this achievement, he received every major award in astrophysics and cosmology, including the Nobel Prize in Physics in 2017.

The research team led by Professor Zsolt Frei at ELTE Department of Physics joined the LIGO Scientific Collaboration (LSC) in 2007. Rainer Weiss visited our university for the first time on the occasion of a LIGO workshop in 2009. As leader of the LSC, he followed closely and supported the work of the ELTE LIGO group, including the development and installation of infrasound microphones at the LIGO sites in the USA: he is generally very positive about the co-operation with ELTE.

In his speech given at the ceremonial general assembly, the professor emphasised that

one of the main goals of LIGO investigations in the future will be to understand what gravitational waves tell us.

In this process, the research team at ELTE has already occupied a crucial role, and – as it can be expected from scientific collaborations – will certainly act the same in the future, as well.

After joining the LIGO Scientific Collaboration, ELTE researchers co-authored more than 100 scientific articles with over 500 cumulative impact factors, which have received more than 10,000 citations. In the framework of this co-operation, not only professors and researchers but also master’s and doctoral students from ELTE had the opportunity to visit Boston (MIT) and Pasadena (CalTech) several times. Our relationship with Rainer Weiss is therefore of fundamental importance regarding both our research and the possibilities of our students. Rainer Weiss still supports and helps the development of the instrument designed at the ELTE Faculty of Science for collecting infrasound data, which is of considerable relevance to the issue of the so-called “gravity gradient noise.” The significance of the results of ELTE in this matter was also emphasised by the professor in his lecture delivered at the University of Stockholm.

In an interview with him, Rainer Weiss emphasised that the observation of gravitational waves and the understanding of their nature are of key importance, because they “provide a new window to the universe.” Electromagnetic waves do not carry information about many phenomena of the universe. However, gravitational waves help us to gain insight into the neutron stars surrounded by the plasma. We can also get a fuller picture of the double neutron star systems spinning extremely fast. Furthermore, black holes and their formation can also be studied and understood better via these waves. “Gravitational waves – unlike electromagnetic waves – can pass through everything unimpeded, including the plasma, charged particles, and even the Earth,” said the Nobel laureate astrophysicist.