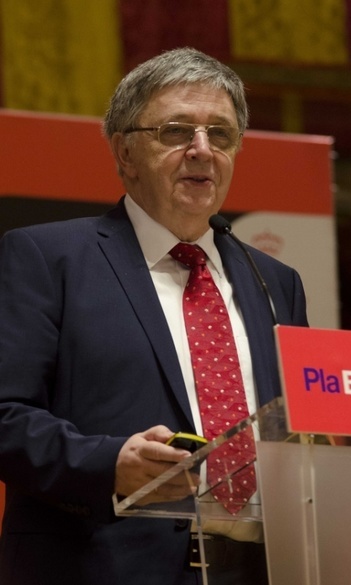 The President of the Hungarian Academy of Sciences and professor emeritus of the ELTE Faculty of Science is the first scientist to be awarded the new scientific recognition of the Academia Europaea–Barcelona Knowledge Hub, an independent international learned society bringing together natural and social scientists. László Lovász received the prize from the hands of Ada Colau, Mayor of Barcelona, at a solemn ceremony on 5 February.

The Barcelona Hypatia European Science Prize is awarded to eminent researchers who have significantly contributed to our knowledge and made an impact on society with their outstanding results. From the twenty-three researchers nominated for the first edition of the prize, it was László Lovász whose scientific career and research was awarded by the five-member evaluation committee this year. The committee awarded him the prize in recognition of his commitment to mathematics, his outstanding international work in the field of the discipline, and his efforts to promote the interests and development of society.

László Lovász was born in Budapest, in 1948. He earned his Candidate’s Degree of Mathematical Sciences in 1970. He graduated in mathematics and received his doctorate (Dr. rer. nat.) from the Eötvös Loránd University in 1971. He was awarded the title Doctor of Mathematical Sciences in 1977. He became a corresponding member of the Hungarian Academy of Sciences in 1979, and was elected a full member in 1985. Considered one of the greatest mathematicians alive, his fields of research include combinatorics and graph theory, as well as their application in computer science and operations research. His has to his name the “Lovász local lemma”, the “Lovász theta function”, and the “Lenstra–Lenstra–Lovász algorithm”.

He has had a major role in making combinatorics (one of the priority fields of mathematical research in Hungary) a defining branch of modern mathematics. Recently, he has focused on the mathematical bases of large networks, and developed the theory of graph limits together with his co-authors. He was awarded the Bolyai Prize in 2007 and the Széchenyi Grand Prize in 2008. Of the great international awards, he also holds the Kyoto Prize and the Wolf Prize. He was elected President of the Hungarian Academy of Sciences in 2014, and was re-elected in 2017.

The Barcelona Hypatia European Science Prize will be awarded every year, and will follow a triennial cycle. The winners will be selected from researchers of three major areas of knowledge: inanimate natural sciences and engineering in the first, life sciences in the second, as well as humanities and social sciences in the third year. The candidates will be chosen by an international jury – including at least two female members – delegated by the Academia Europaea and the Barcelona City Council. The prize named after Hypatia of Alexandria (355-415), the first known female mathematician, who died a tragic death, features a monetary award of 30,000 EUR.

The ELTE Communications Office made a short film with László Lovász in the series titled “I studied at ELTE, of course”: