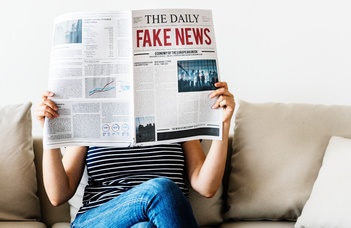 HU
New research at Eötvös Loránd University gives insight into why people accept or reject wish-fulfilling political fake news. Results support that partisanship (supporting or opposing those in power) is a more important factor than belief in conspiracy theories, and considerations about the source of news also plays an important role in this process. The research also reveals that the acceptance of wishful fake news is not necessarily more common among conservatives, but it is a universal phenomenon.

Laura Faragó, Dr. Anna Kende, and Dr. Péter Krekó, researchers of the Department of Social Psychology, Eötvös Loránd University, conducted two survey studies to investigate why people fall prey for political fake news. Their manuscript has just been released in Social Psychology. Previous studies found that conservatives are more likely to believe in fake news. However, these studies looked mainly at negative or threatening content, and conservative people tend to be more susceptible for this kind of information, therefore, they accept this type of fake news more often as real. The researchers tried to avoid that by using wish-fulfilling, positive fake news instead to measure differences in fake news acceptance.

people’s tendency to believe in information that is consistent with their worldview,

and the rejection of inconsistent information. They hypothesized that both liberals and conservatives, and both supporters of the government and its opposition would accept fake content, if it aligns with their pre-existing opinion.

The researchers used a sample representative to the Hungarian population and a student sample to test their hypotheses. Respondents of the surveys were presented with fake news headlines, which were allegedly released in social media in the previous months. The results supported the hypotheses: party preference was the most important determinant of accepting political fake news as real, more important than beliefs in conspiracy theories, previously thought to strongly influence fake news acceptance. Supporters of the government found pro-government news more credible than pro-opposition news, and thought that they were written by an independent journalist. They rejected the pro-opposition news because they thought that it was political propaganda. Supporters of the opposition parties showed the opposite pattern. However, all news was fake.

In summary, people tend to believe that news fulfilling their hopes and wishes come from credible sources and in turn they are more likely to believe them as real. However, if the news is inconsistent with their ideology, they will also think that the news is part of political propaganda, and therefore reject it.

These findings suggest that none of us are immune from deliberately created misinformation. The rule of thumb should be not to automatically trust sources that report what we would like to hear.

Critical evaluation of the source of information should be the primary tool when consuming political pipedream news.

Source: Faragó, L., Kende, A., & Krekó. P. (in press). We only believe in news that we doctored ourselves: The connection between partisanship and political fake news. Social Psychology.