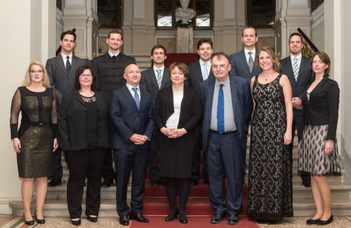 Gábor Harami obtained his PhD degree in biological sciences from the ELTE Faculty of Science in 2016. Currently he is an associate research fellow at the Department of Biochemistry of the ELTE Faculty of Science, where he is a member of the Motor Enzymology Research Group. In 2017, he won a three-year fellowship under the funding scheme of the MTA Premium Postdoctoral Research Program. He was awarded with the Junior Prima Prize for his work carried out in the field of genetic research.

Szabolcs Takáts gained his PhD degree in biological sciences at the ELTE Faculty of Science in 2015. Currently he is an associate research fellow at the Department of Anatomy, Cell and Developmental Biology. In 2016, he got a three-year fellowship under the funding scheme of the MTA Premium Postdoctoral Research Program. Additionally, he successfully applied for ‘Funding for research groups with internationally outstanding high impact results’ from the National Research, Development and Innovation Office (NKFIH) in 2017. He received the Junior Prima Prize for his investigations in molecular cell biology.

Academicians and professors, being leading authorities on different disciplines, are invited each year by the Hungarian Development Bank (MFB) to nominate several researchers for recognition. It is from these candidates that a professional jury selects ten researchers who, despite their young age, are highly acclaimed for their research results and publications at an international level. Eventually, in this strong competition, the winners of the prize are selected on the basis of the number of publications, lectures, and citations, as well as innovative scientific findings made in their respective research areas. This year, the recognitions were handed over by Ádám Török, Secretary General of the Hungarian Academy of Sciences, Edit Juhász, State Secretary for National Financial Services and Utilities, and Tamás Bernáth, Chairman and Chief Executive Officer of the Hungarian Development Bank, in the main building of the Hungarian Academy of Sciences.

The Junior Prima Prize was first presented in 2007. The founders of the recognition decided then to give the prize those young people who deliver exceptional performance under the age of 30, who are truly the best among the best. The age limit is higher only in the category of science: it is 33 years.