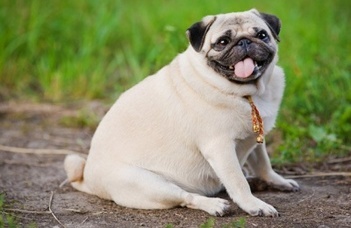 In cooperation with the University of Padova, the new study of Eötvös Loránd University Department of Ethology shows that when it comes about being motivated by food reward, obese dogs show similar attitudes to overweight human patients.

Just as in humans, being overweight is a more and more serious problem among dogs, too. Canine obesity is a vividly studied topic due to its welfare consequence and its complex causation. Furthermore, as dogs share the anthropogenic niche with humans, and they show analogous socio-cognitive capacities with us, the reasons behind dogs being overweight could also provide a good model in human obesity research.

A research team including Orsolya Torda PhD student, and led by Péter Pongrácz investigated whether the quality and predictability of food reward would influence differently the behavior of obese and normal weight dogs. Additionally, it was also tested whether the obesity-proneness of particular dog breeds would have an effect on the subjects’ food choices. Dogs of normal and overweight body condition were tested from obesity prone (Beagles, Retrievers) and non-obesity prone breeds (Border Collie, Mudi). The subjects participated in two experimental protocols. In the ‘two-way object choice’ they had to find the hidden reward in one of two pots, by following the pointing signal of a human experimenter. The indicated bowl always contained food reward of low incentive value (carrot or orange). However, in the other bowl dogs could find either nothing (‘no reward alternative’) or a slice of sausage (‘reward alternative’. According to the results, independently of the breed, obese dogs followed less diligently the human pointing and in case of the ‘reward alternative’ tended rather to choose the pot that contained the sausage. This behavior suggests that obese dogs prefer to concentrate their efforts on obtaining energy rich food, even if this behavior is in contradiction with the well-proven inclination in dogs to follow human-given cues. It is also well known that obese people show preference for the high-calory meals instead of ‘healthy food’.

The second experiment was the so-called cognitive bias test. Dogs were at first trained distinguish reliably between an always-rewarded bowl against a never-rewarded bowl. After this the researchers offered them a bowl at mid-way between the ‘positive’ and ‘negative’ locations. This is the ambiguous choice, because the subject cannot be sure whether it contains the reward or not. The results showed that overweight dogs approached more reluctantly the ambiguous location – in other words they judged more negatively this situation than the normal weight dogs did.

Overweight people can also be characterized more often with ‘pessimistic attitude’ due to their proneness to depression.

The obesity proneness of dog breeds did not show association with the behavior of the subjects in this study. At the same time whether a dog breed was selected for a cooperative task or for working independently it had an effect on the subjects’ performance. Cooperative breeds were more keen in following human pointing cues, meanwhile Beagles (independently of their body condition) in general behaved similarly to the overweight dogs.

The results of this study further emphasize that dogs provide an excellent opportunity for investigating the socio-cognitive and personality-related background of several behavioral traits that might also be relevant in humans.