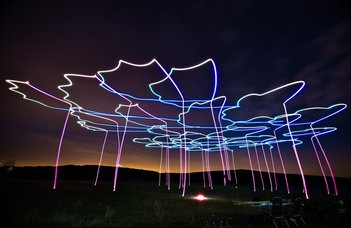 Nowadays there are millions of drones in the sky all over the world, and most of them are directly controlled by a pilot on the ground. Researchers from ELTE have now developed drones that gather together into large flocks getting thus rid of their ground control: they communicate with each other and fly towards their common destination avoiding obstacles, as birds do.

The research results of ELTE Department of Biological Physics and MTA-ELTE Statistical and Biological Physics Research Group related to autonomous drone swarms received worldwide attention first in 2014. Tamás Vicsek and his research group was the first to create a self-organized swarm of ten outdoor quadcopters. Agoston E. Eiben, a professor of Hungarian descent, from Vrije Universiteit, Amsterdam has recently joined the research team. He has optimized the control algorithm of drones with evolution strategies. The results speak for themselves: the researchers were able to demonstrate the high-speed coordinated flight of 30 autonomous drones in the field and one-thousand drones in realistic simulation, in environments full of obstacles without collisions.

The swarm control algorithm combines models describing natural flocking systems with drone-specific motion constraints and some level of intelligent route planning. Numerous parameters of the resulting control framework needed to be optimized for the task with evolution algorithms using the supercomputers of ELTE.

„When one listens to the complex melodies of the greatest classical composers, watches the insanely precise spinning of figure skaters, or observes the perfectly synchronized flight of thousands of starlings in a flock, the overall impression is the graceful harmony and perfection of these systems. Nevertheless, these are very complex systems, which seem so magnificent only as a result of endless practicing and polishing, that is optimization. Complex systems are characterized by such an amalgamation of simplicity and elaboration, where optimization is necessarily a part of the operation” – says Gábor Vásárhelyi, leader of the robotic lab at ELTE Department of Biological Physics.

The intelligence of robotic systems is developing at an accelerated rate worldwide, which has been raised to the level of collective intelligence by current research. If self-driving drones are accepted similarly to self-driving cars, the collective mission completion of large drone swarms without pilots may have several interesting and useful application possibilities, for example, in the fields of precision agriculture, environmental protection, disaster management, protection of property, or even package delivery or drone-based transportation.