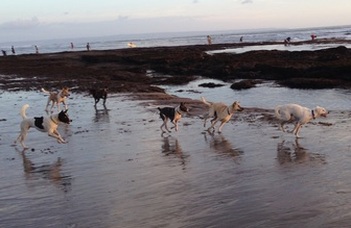 Free-ranging dogs in Bali may not be as wild as they appear. New research from Eötvös Loránd University reveals that living in human homes affects the personality of some Bali dogs making them more excitable in comparison to free-ranging dogs.

Free-ranging dogs are one of the most widely distributed carnivores in the world, yet scientists are only just beginning to study their behaviour. They are often considered as antagonists to local wildlife, or perceived as a pest when occupying a human-dominated landscape, which is also the case of the free-ranging dogs of Bali, Indonesia, a unique population of Canidae.

Bali dogs have been free-ranging for thousands of years. While they often show a high level of arousal, they are also recognized as excellent “pets”. In fact, expatriates populating the island over the last few decades occasionally adopt Bali dogs and keep them restricted to their houses and backyards, as is typical in modern western cultures.

The tendency to adopt dogs has provided researchers with the unique opportunity to compare the personality traits of dogs according to their lifestyle, namely, living as human companions and living as free-ranging animals.

In addition, researchers have explored the impact of demographic variables (such as age, sex, and neutered status) on the dog’s personality.

Marco Adda, an independent researcher of dog behaviour (director of Anthrozoology, Education and Canines (AEC)) initiated preliminary observations of Bali dogs in Bali in 2012. The observations proved novel and exciting, and so in 2014, he brought them to the attention of Prof. Ádám Miklósi and Enikő Kubinyi at the Department of Ethology, Eötvös Loránd University, in Budapest, Hungary. Together with Luca Corrieri (also from the Ethology Department), the study was developed and further observations and questionnaire collection were planned and carried out over the next few years. Owners and caretakers filled out a validated personality questionnaire for 75 adult dogs; caretakers observed and occasionally fed the free-ranging dogs for at least two years before filling out the questionnaires. The result were intriguing.

The researchers found that free-ranging Bali dogs are less active, excitable and aggressive towards animals,

and are also less inclined to chase animals or humans than Bali dogs living as human companions in a typical domestic setting (house/fenced backyard, etc.).

Among free-ranging dogs, females were found to be more excitable. Females in the whole sample were also more fearful of people. Although further investigations are needed, the results of this preliminary study suggest that a change in lifestyle, i.e. being adopted, and living in a confined environment has negative consequences on some canine personality traits, such as activity/excitability, aggression towards animals, and prey drive.

One main feature of this study is the targeting of a dog population that in the past has not gone through artificial selection for morphology or behaviour, in contrast to the Western dog population.

“The fact that in recent years some of the Bali dogs have been adopted by expatriates and live a “Western” lifestyle allowed us to uncover a few potential differences between the personality of free-ranging and companion dogs, without the confounding effects of breed differences.”

The study deserves particular attention considered that the population of Bali Dogs has declined from some 800,000 individuals in 2008 to a number of no more than 150,000 individuals in 2018, namely, a dramatic drop of 81% of the entire Bali dog population in the last ten years. Moreover, studies on the personality of free-ranging dogs are rare, which makes this study a unique case.

The study was publish in PLoS One.