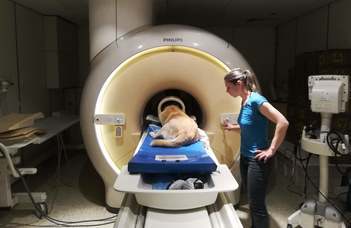 To describe them researchers utilized functional Magnetic Resonance Imaging (fMRI), a neuroimaging method which allows for indirectly collect information about brain activity in a harmless way. The participants were family dogs who participated in a special, reward-based training for at least half a year to be measurable awake and unrestrained in this special setup. The measurements have been conducted at the TTK Brain Imaging Centre.

Figure 1 Kara, one of the participants, positioned in the MR scanner. The straps are used to hold the circular coil in position for the measurement, not to restrain the dogs.

The term resting-state refers to the fact, that during this type of measurements, the subjects are not exposed to any specific stimuli (e.g. pictures or sounds) and they do not need to carry out any explicit task, that is, they rest in the scanner.

The method the researchers utilized can be imagined like this: “You see a decorated Christmas tree with flickering lights and you need to say which bulbs belong to the same strings-light, but you are only allowed to take pictures from across the room. What you can do with this, is to take a series of photos and then look at the pictures you take one-by-one and see which individual bulbs tend to be on or off simultaneously. One line of Christmas string lights in this example is like one rs-network.” explains Dóra Szabó, the first author of the article. 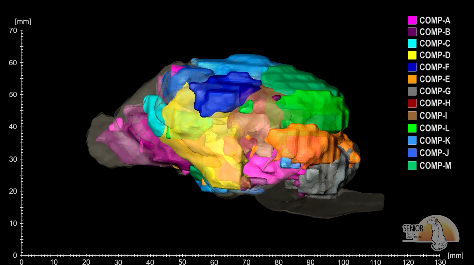 “Based on anatomy, the described networks are similar to human networks such as the default-mode network, sensorimotor, auditory and frontal networks (e.g. COMP-C in the video), but further studies will reveal whether they play similar roles in dogs to that of humans. The results give insight into the resting-state networks of awake animals and paves the way for investigating how the brain changes with age” - summarizes Enikő Kubinyi, senior author of the study.

You can have a look at an animation about the newly described networks in the dog brain here.