"During my career I have always tried to promote young students" 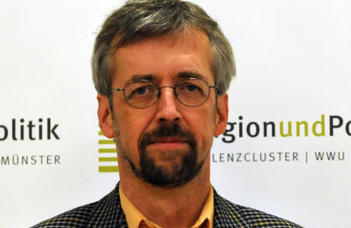 His main area of research covers the history of late antiquity and early Christianity. In addition to the social and cultural history of the Roman Empire, he has also examined the role of Judaism within the empire. His investigations of Alexander the Great turned his attention to the history of India, which he studied until late antiquity. Johannes Hahn is professor of the University of Münster and has recently become a honorary doctor of Eötvös University. He was interviewed by György Németh, professor of ancient history at the Faculty of Humanities.

You were an assistant lecturer in Heidelberg in the era of Prof. Géza Alföldy, who came to Heidelberg from our university. What influence did he have on you and on your career as a scholar?
Géza Alföldy was the most innovative, seminal and internationally respected scholar of his generation in Germany, a giant in the field of Latin epigraphy and Roman social history. But for me as young student – I studied in 1979/80 two semesters in Heidelberg – and later as a young scholar – he invited me back to Heidelberg in 1982 to become his assistent and doctorand – certainly more important was his personality. He was a truly charismatic teacher and scholar – and incredibly generous. Many of my friends and later colleagues and even my later Danish wife I met in Heidelberg due to his international renown.

He attracted so many young students and scholars and took the time to talk to and advise all of them intensively. He assembled all his 'pupils' in his famous 'Fortgeschrittenen-Kolloquium' where we, students and foreign scholars alike, studied unpublished inscriptions, some of them spectacular new finds – the funeral inscription of Tacitus, the building inscription of the Colosseum and others – and we were thus all lured into epigraphy by Prof. Alföldy.

I still treasure a photograph he once shared with us: We all easily recognised a capital N on it and some illegible traces around. However, at the end of the seminar he had reconstructed, meticulously and irrefutably, an imperial inscription of five lines! And his generosity: he supported everybody, and so also my wish to leave to Oxford after ten months: he wrote recommendation letters and even organised a personal meeting with the great Sir Ronald Syme for me. Later, after finishing my doctoral thesis under his supervision, he suggested to me to turn to Late Antiquity for my Habilitation, an epoch he himself had no interest in. And, of course, he supported me again later when I was applying for grants and jobs. He definitely laid the fundaments of my academic education and career.

He taught me epigraphy and social history and sympathized with my way into intellectual and religious history and into Late Antiquity. And he brought me to Hungary and Budapest the first time in my life, introduced me to the Pannonian provinces and to their rich treasure of inscriptions.

What importance do you attach to the study of ancient Judaism and Christianity?

The transformation of societies is one of the most fascinating phenomena in history.

Religion can work as a powerful stabilizing factor here, in Judaism indeed representing the core of the identity of a people through the whole of its history. But it can also act as a revolutionary force overturning established social and political structures and redefining the rules and modes on all levels of human life. To understand the transformation of the ancient world in Late Antiquity it is essential to understand the impact of Judaism and Christianity on local and imperial societies, on the institutions in these communities, and on the mentality of common people in a rapidly changing world.

Ancient India was rather far off from the Roman Empire, and their relationships were also loose. How were you attracted to this area of research?
By pure accident – and by friends who have always been important for me, my intellectual and academic development and interests. One of them taught me the importance of the East, another invited me to write a book on Alexander's expedition to India. I realised that speaking of the fringes of the Mediterranean world or of the Roman empire is, historically and culturally, a gross misconception. Not only have there always been strong influences from the East into the Mediterranean basin but, particular in the aftermath of Alexander's conquests and the establishment of the Hellenistic world, there existed an intense exchange of goods and ideas. Neither the cultural development of the Indian subcontinent nor the emergence of Buddhism can be understood without this background and, connected to it, the etablishmet of the silk road – and, vice versa, important intellectual, economic and other developments in the Greek and Roman world. The fascinating art of Gandhara, the emergence of Indian coinage, and later the use of Roman coins as bullion in India would not have been possible without the continuous encounter of East and West in these parts of Central Asia.

What are your scientific relations with Hungary and Eötvös Loránd University?
As I explained before,

it was Géza Alföldy who laid the ground for my relations with your country and university.

As his assistent I came to Hungary in 1985 for the first time, supporting him in the organisation of an excursion of a group of his students in Heidelberg. Budapest and its then morbid k.u.k. flair impressed me enormously - as did the excavation sites, museums and epigraphical collections we visited and studied on our way, with Savaria, Aquincum and Magyar Nemzeti Múzeum as some of the highlights.

In Budapest I was also introduced to András Mócsy who, at your university, held the chair of Archaeology and, at the same time, a professorship in Ancient History, a very kind, wise and generous scholar who deeply impressed me. The close connection of Roman provincial archaeology and ancient history were something new to me, and very convincing. Later, as a professor in Münster, I led an excursion of students to Hungary myself and could meet several of the colleagues in Budapest again, among them György Nemeth and, of course, László Borhy, your present rector, whom I had met in Heidelberg in 1986 when he had travelled there to study with Géza Alföldy and later to become his assistent – and a friend of mine.

Your university is of biographical and academic importance for me in another way too, as I taught here, in autumn 1995, just before I took up the chair in Münster, for the first time as a guest professor abroad: a seminar on the social relevance of dreams in the ancient world (I still keep the records). My academic contacts extended to the Central European University and their History Department later as well: in summer 2015 I was invited to teach a graduate seminar on Late Antiquity there. In recent years these connections were less intense: the many obligations in my own university have somehow constricted my relations to my colleagues here. But this will not last, new plans are in the making.

What are your research plans for the future?
I am presently writing a book on martyr's veneration in Late Antiquity. I want to show that this new religious practise was a key element in the religious revolution of the 4th century AD in church and society. It was instrumental to attract the common people to the church and to develop new forms of popular devotion which allowed to integrate traditional pagan practices and believers. Looking, e.g., at the evolution of Christian architecture in the fourth century it becomes apparent that martyria and martyr's veneration were much more important for the Christianization of the Roman Empire than regular church building.

Another project is a book on Roman coinage as political communication in the principate.

Here I want to discuss the multi-faceted messages which conveyed the achievements of imperial rule and individual rulers to the public. Being a principal investigator in the multi-disciplinary Münster Exzellenzcluster Religion and Politics for some more years to come, I am also active in setting up a new long term interdisciplinary and inter-university research cooperation on Cultures of Compromise which will focus on the actual political and sociological debates but intends to ground them in historical perspective. I want to discuss the Athenian democracy and the late Roman republic and contribute to a wide-ranging comparative analysis of the role of compromises in pre-modern societies and political systems.

Further plans comprise the discussion of hagiographic, in particular Coptic and Syriac, sources with view to their potential to illuminate historical and social conditions; the role of doctors and medicine in Greek warfare; the logistics of Alexander's army in the East; aspects of late Roman prosopography; the social environment of Neoplatonic philosophers in Late Antiquity etc. I am not afraid of running out of new ideas.

Which role play doctoral students and young researchers in your agenda?
This group represents the future of our disciplines and of academia altogether. Young scholars deserve any possible support, intellectually and financially. Challenges for them have increased considerably in recent years. They are expected to master a wide array of methodologies, to look beyond the borders of their own discipline, to study abroad, to publish articles very early etc.

During my career I have always tried, not only as supervisor, to promote and to coach young students and doctoral candidates, to bring them into contact with peers and with relevant senior scholars. Such individual initiative is important but not enough.

Recently I built up a graduate school in Münster

which has now officially started as Münster School of Ancient Cultures under my lead. It comprises colleagues and doctoral students of 23 disciplines, covering the whole ancient world including e.g. China and Early Islam, with the explicit aim to enable our students to work interdisciplinary and internationally: we want to bring them into contact with the best experts in their particular research field, to move in international contexts and to find peers who share their enthusiasm and the challenge as promovendi.

We organize international workshops and also encourage them to attend conferences all over Germany and, even more important, abroad, thus providing them with an attentive, inspiring and productive basis during their years as doctoral researchers. And we want to invite graduates from abroad to join such exchange, to participate in our teaching and workshops and to build networks. I am very much looking forward to meeting graduates and young researchers of your university to talk about ways to let you participate in this academic context. I feel that this is, at the same time, very much in the spirit of my teacher and mentor, Prof. Géza Alföldy – and I am proud to be able to do this in Eötvös Loránd University, his home university more than 60 years ago.