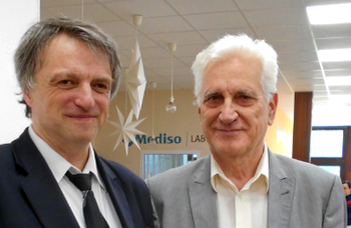 The CEEPUS Minister’s Prize was established by the Central CEEPUS Office in 2001, aiming to motivate and recognise the professional activity of CEEPUS networks. Since 2002, the annual recognition has been awarded to the most excellent networks as assessed by an international panel of experts. Hungary received this prize eight times, which makes it the best performing country in terms of the number of prizes won.

After 2004 and 2007, the International Cooperation in Computer Science network received this recognition again. There are only two more networks to have won this prize three times, so far. The network led by the Department of Programming Languages and Compilers at the ELTE Faculty of Informatics has been coordinated by Professor Zoltán Horváth for over twenty years. The international cooperation comprises 18 higher education institutions from 11 countries. In addition to ELTE, the Institute of Informatics at the Faculty of Science and Informatics of the University of Szeged joined in the partnership from Hungary. Within the framework of the network, several joint international trainings have been held, joint curricula have been developed, important international research projects have been carried out, and many companies have been involved as partners in the collaboration. The network is very effective in terms of student and teacher mobility, which is supported in every possible way from traditional part-time trainings to the organisation of summer universities.