ELTE in leading position in the QS regional university rankings 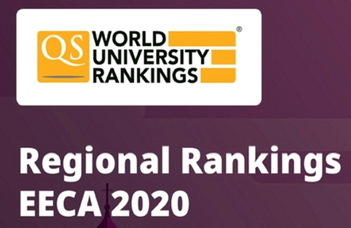 ELTE is the best Hungarian university according to the Quacquarelli Symonds Rankings 2020, featuring the top universities in emerging Europe and Central Asia.

Eötvös Loránd University achieved the 28th rank in the Quacquarelli Symonds Rankings 2020, featuring the top universities in emerging Europe and Central Asia (EECA). ELTE thus belongs to the top 8% of the 354 institutions assessed, and it is ranked again first among Hungarian higher education institutions.

The ranking is based on ten indicators. These factors include academic and employer reputation, faculty/student ratio, the number of papers published, and online appearances. It also takes into account the proportion of academic staff members with a Ph.D., the citations of publications, web impact, as well as the proportion of international faculty members and international students. From these indicators, ELTE performed best in the field of academic reputation, according to a QS statement. You can read more about the methodology of ranking here.

ELTE is usually one of the highest-ranked Hungarian universities in international and domestic rankings of higher education institutions.