ELTE in the Chinese Central Television 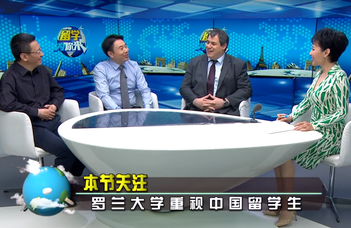 Millions of Chinese students had the chance to get to know more about the Hungarian Higher Education including the program offer of our university on 18 May, when leaders of ELTE responsible for Chinese affairs were interviewed on the educational channel of CCTV.

The two, 45-minute-long shows provided an opportunity for the representatives of our university to give a detailed picture about Hungary and the Hungarian Higher Education for the Chinese students interested in studying here and also present the selection of the foreign languages which are offered to study at ELTE. Imre Hamar, Vice-Rector for International Affairs emphasized, that ELTE is providing a diverse scale of degree programs and also an English Foundation Course for the students. The show also presented a compilation of visual materials introducing Hungary and ELTE containing short interviews with our Chinese students recommending to study at ELTE for their peers in China. Thanks to the broadcast gone live on 18 May, 6:00 PM, millions of Chinese students were introduced to ELTE.

The two broadcasts are available below: