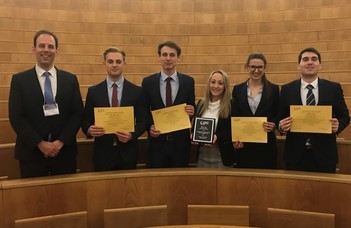 HU
ELTE law students managed to achieve what no one else has in the history of international law moot court competition: their team finished on the top step of the podium in two consecutive years.

The team of Patrik Boa, Luca Farkas, Marcell Koncsik, and Kálmán Varga is the first team in the history of the competition to succeed in defending their title. The balanced strength of the team is well demonstrated by the fact that all four agents finished in the top ten.

Zolta Buda received the Best Judge Award in the competition. The Hungarian team was not once scored by a Hungarian judge out of eighteen judges in the six rounds.

This year, the members of the team were prepared by Gábor Kajtár, assistant professor, and Barbara Bazánth, PhD candidate, junior associate.