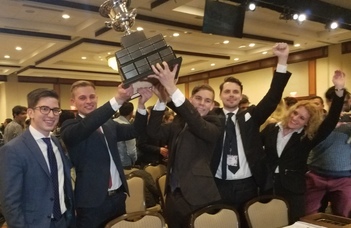 On April 6 2019, the Eötvös Loránd University won the Jessup Cup with the American Columbia University as the runner-up, at the international final round held in Washington D.C. of the most prestigious international moot court competition.

Last year, the Jessup Team of ELTE Law School had already achieved tremendous success by winning the award given to the best combined memorial first place, thereby winning the written part of the moot court competition. This year, however, they even managed to win the oral part by succeeding to the championship round, where they competed with the team of  Columbia Law School. The competition has been organised for 59 years, and this was the first time that a Central European team could compete for the Jessup Cup and even win it.

Jessup is the world’s oldest and largest international moot court competition. It was first organized by Harvard Law School in 1960. Since then, the competition has become global.

More than 680 universities from all over the world participate in it every year.

Among these, the best 130 teams qualify to the international round, traditionally held in Washington, D.C. In the moot court competition the teams have to prepare oral and written pleadings arguing both for the applicant and respondent positions in a legal dispute between two fictitious countries.

The writing part involves preparing two 60-page-long memorials in English. In the oral part, the teams present two 45-minute oral pleadings in English before a panel of three judges during which they are expected to answer the questions posed by the judges.

This year, the members of the ELTE Jessup Team – Gábor Bazsó, Zolta Buda, Marcell Koncsik, and Vanessa Szép – got into the final championship round after beating the teams of seven other countries. Gábor Bazsó also won the Best Oralist Award of the Championship Round. ELTE Jessup Team was coached by dr. Gábor Kajtár LL.M. (Cantab) and dr. Katalin Sulyok LL.M. (Harvard), professors of the ELTE Faculty of Law. The team was accompanied to Washington, D.C., by Dániel Pap, lawyer at the European Court of Human Rights, who himself had also successfully taken part in  Jessup in 2015 and received the 2nd Best Oralist Award in the International Rounds. ELTE has sent teams to the Jessup competition for thirty years, and Professor Kajtár has trained teams for ten years, with increasing success.