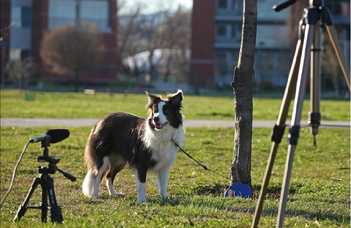 One of the most frequent behavioural problem of pet dogs is a more or less severe stress response when the dog is separated from its owner. The signs of this include excessive vocalisation, destructive behaviour, intents of escaping, restlessness or pacing.

Although a mild stress during separation is normal because of the attachment bond between dogs and their owners, in some cases it becomes so intensive that it is a wearing situation not only for the dog but even for the environment. Since separation related problem has an important animal welfare aspect it is highly investigated, and the possible signs, various causes and risk factors are well known. However, we still know little about the dog’s inner state during separation. Beside the often mentioned fear and anxiety, the stress when the dog is left alone can also be triggered by frustration.

At the Department of Ethology at Eötvös Loránd University (Budapest, Hungary) a team of researchers, including Rita Lenkei PhD student and her supervisor, Péter Pongrácz, asked whether the different inner states of dogs manifest themselves in different signs of stress during separation. They assumed that if the owner behaves generally inconsequently towards his/her dog, its frustration threshold may be lowered. These owners react differently in particular situations making the dog unsure about the consequences of its behaviour what results in frustration. It was assumed that the stress signs of these dogs during separation will also be rather caused by frustration than fear. To test experimentally the possible differences between the reaction of fearful and frustrated dogs during the absence of the owner, their vocalisations were recorded and analysed. Earlier results showed that the separated dogs’ vocalisation is includes diverse and mutually exclusive elements.

In the study, the personality traits of the owner and the dog and the owner-reported separation related problems were assessed with a questionnaire.

Besides, the researchers run an outdoor separation test that lasted for 3 minutes. During this the owner tethered his dog to a tree and walked away, finally disappearing behind a building. Based on the results of the questionnaire and the behaviour test it was found that dogs of inconsequent owners more likely barked, but at the same time whined less when they were alone. Frustration appears if an important resource is unreachable or when the expected reward for an earlier reinforced action ceases. While whining is mostly the manifestation of fear, barking might be rather caused by frustration in order to change the owner’s behaviour.

The researchers also found new connection between separation problems and food related behaviours. Dogs with separation-related behaviour problem generally show more frequent and more intense food begging behaviour. The demand for food and the presence of the owner may have common roots. Dogs that beg food more often and more intensively may tolerate frustration less that also causes signs of stress when the dog is left alone.