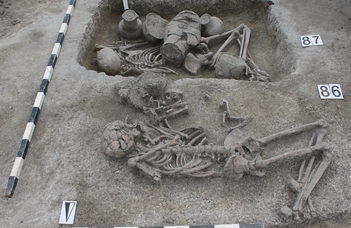 HU
The transition from food gathering to food production has caused temporary deterioration in health, established an international research group. A study exploring the health of European prehistoric communities was published in the PNAS, a peer- reviewed journal of the National Academy of Sciences of the United States, with the contribution of researchers from Eötvös Loránd University.

According to the current view, with the start of food production (approximately 12,000 years ago), the population increased significantly, while general health conditions deteriorated to a great extent. The authors conducted an anthropological and archaeogenetic survey on the skeletal remains of 167 individuals who had lived in Europe between the Upper Palaeolithic (36,000 BC) and the Middle Iron Age (400 BC).

Since, in addition to genetic factors, environmental aspects (nutrition, starvation, common chronic illnesses) play a key role in the development of height in adulthood, a comparison of genetically determined (i.e. potentially achievable) height reconstructed from general health conditions and the actual height offer valuable information. Researchers, therefore, contrasted the height estimated on the basis of the length of bones with the potentially attainable height values based on genetic data.

The study of the bones from the periods above also covered the so-called physical stress indicators (skeletal symptoms of malnutrition and anaemia). The results suggest that

The publication is available here.