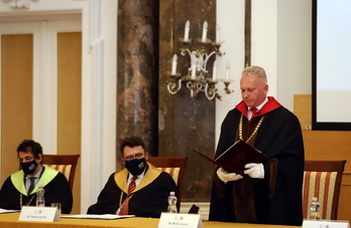 The activities of five preeminent foreign scholars were acknowledged with the highest-ranking distinction of the university at the ceremonial session of the Senate. The Deans praised the work of the university’s new professors in Aula Magna in the presence of some guests, while the recipients of the award thanked the recognition on video from their homes.

It is traditionally in May, on Pázmány Day marking the anniversary of the foundation of Eötvös Loránd University, that the university acknowledges the activities of preeminent scholars who have been cooperating successfully with the university for a long time. This year, the titles of doctor et professor honoris causa were awarded under unusual circumstances. The ceremony was held on 16 October, and the new Honorary Doctors followed the event online, from their homes. The ceremonial session of the Senate was opened by Rector László Borhy in the presence of diplomats and university leaders.

Professor Armin von Bogdandy is a most recognized expert and a spearhead of public international law and the law of the European Union, a public lawyer with outstanding results achieved. He graduated in law and philosophy in Freiburg in 1984. He is professor at Goethe University in Frankfurt since 1997 and director of the Max Planck Institute for Comparative Public and International Law in Heidelberg since 2002.

He specializes in the general features of public law, with a focus on its structural change.

He has achieved outstanding theoretical, doctrinal, or practical results.

Professor von Bogdandy has a close relationship with our Faculty for more than a decade now and is supporting us in both research and teaching. He is a regular speaker at ELTE’s scientific events which deal with human rights or the law of the European Union. Since the beginnings in 2015, he regularly offers lectures at ELTE’s European Human Rights LL.M. programme and we have also had the pleasure to welcome him as an expert on several projects.

Armin von Bogdandy said that his father, who was a Hungarian consul, would certainly be very proud of him now. In addition to the personal reason, this recognition gives him great pleasure from a professional point of view as well. When Hungary joined the European Union, one of the founders of which was Germany, the two countries entered a common platform. This alliance considers democracy, pluralism, solidarity, and tolerance to be of the highest value while allowing for the maintenance of diversity and the preservation of the identity of nations. This high expectation must be constantly met in all corners of the European Union, and lawyers have a major role to play in this. The collaboration between the lawyers of Eötvös Loránd University and the University of Frankfurt also strengthens this democratic European community, and the current award serves the same purpose, too.

Wim van den Brink, a professor at the University of Amsterdam, was awarded an Honorary Doctorate by ELTE at the initiative of the Faculty of Education and Psychology. His merits were praised by Dean Zsolt Demetrovics.

His main scientific interests are related to the neurobiology of substance use disorders and other addictive behaviors,

the pharmacological and psychological treatment of substance use disorders and related comorbidities, and the reduction of stigma regarding patients with an addiction.

Since 2002 Professor van den Brink developed a strong collaboration with the Department of Clinical Psychology and Addiction, Institute of Psychology of ELTE. In the framework of this collaboration the annual conference of the European Association of Substance Abuse Research has been organized two times in Hungary, important meetings of the ICASA network took place in Budapest. Numerous research papers have been published as result of collaborative research and doctoral student exchange could become part of these.

Wim van den Brink expressed his gratitude to all those who contributed to his winning the title, first of all to ELTE and his university. Researchers at both institutions see it as important to enhance the quality of life for people suffering from addiction. The joint work has contributed to the fact that alcoholism, drug use, smoking, and other addictions are currently regarded as diseases, which can moreover be cured. It is an additional pleasure for the professor that, as a physician, he has had the opportunity to work together with psychologists at ELTE. In his view, the collaboration between the two disciplines may considerably contribute to bettering the lives of people suffering from addictions in the future.

Zsolt Cséfalvay, a professor at the Comenius University in Bratislava, received an Honorary Doctorate with the support of the Bárczi Gusztáv Faculty of Special Needs Education. His academic activities were presented by Dean Gabriella Papp.

Professor Zsolt Cséfalvay is an internationally recognized researcher in the field of speech therapy, as well as a professor in the Department of Speech Therapy at the Faculty of Pedagogy of Comenius University in Bratislava. Within the field of speech therapy, clinical speech therapy has played a key role – not only in terms of development, research and university curriculum, but also in the diagnosis and therapy of neurogenic speech and language disorders. He is a published author on aphasia in neurological books, which has led to teamwork with representatives of the medical community as equals. This is reflected the inclusion of a speech therapist as a member of the professional team performing brain tumour surgeries in Slovakia (and for the first time in the world).

He maintains contact with the colleagues at Bárczi Gusztáv Faculty of Special Needs Education of Eötvös Loránd University (ELTE), thus he actively contributes to professional development in Hungary, mainly in the fields of aphasia therapy, communication disorders related to neurodegenerative diseases, and alternative and augmentative communication.

Zsolt Cséfalvay told that it is of symbolic importance for him that he received the Honorary Doctorate on the Language Development Disorder Awareness Day. He considers himself to be very fortunate because he has been able to work on the same subject from the beginning of his career. Furthermore, applied sciences have the advantage of providing practical benefits, which brings joy. In everyday life

the greatest inspiration for him is to be able to improve the condition of people who suffered brain injuries.

The recognition awarded to him by Eötvös Loránd University will certainly be an additional motivation in his work. He has received appreciation, as well as professional and human support from this institution for forty years – since when, freshly graduated, he first entered the college that was Bárczi’s predecessor.

Marie-Vic Ozouf-Marignier, a professor at EHESS in Paris, was nominated for the award by the Faculty of Arts. Her outstanding achievements were related by Dean Gábor Sonkoly.

Professor Marie-Vic Ozouf-Marignier, geographer-historian, is a professor at the École des Hautes Études en Sciences Sociales (EHESS) in Paris. Her primary focus is on the one hand the different forms of territorial identity, and the history of their evolution between the 18th and the 20th century. On the other hand, her other major field of research consists of the politics of French and European regional development, questions of the political division of space, and the problem of regionalism.

Furthermore, she is conducting prominent research in the field of the history of geography.

For more than two decades, she has played a vital role in establishing and maintaining fruitful relations between the Faculty of Arts of ELTE and the EHESS. She is generously contributing to educational and academic cooperation, and to the talent management and education of Hungarian students, doctoral students and young researchers.

Marie-Vic Ozouf-Marignier first visited Budapest 25 years ago and has been a recurrent guest speaker of the doctoral programme at the Atelier Department of Interdisciplinary History since then. She has been managing the joint doctoral programme of the two institutions on the French side since 2007. She has been organizing the reception of Hungarian doctoral students in Paris and has been the supervisor of several Hungarian Master’s students writing their theses. Furthermore, she has also been the coordinator of the Erasmus agreement between ELTE and EHESS since 2008. When she came to Hungary to teach at ELTE, she was surprised at how well-prepared the students were even in French history. She admits that she has greatly benefited – both professionally and personally – from the joint research occasionally involving several institutions.

Simon Thompson was nominated for the title by the Faculty of Informatics. The activities of the professor at the University of Kent were praised by Dean Zoltán Horváth.

He is a prominent researcher in the field of Functional Programming, and the author of several widely known books

and of about 150 scientific articles.

“Although computer science is very young compared to ELTE, two of their founding fathers are from our countries”, Simon Thompson said after he thanked for the award. János Neumann from Hungary and Alan Turing from Britain even met at Princeton University, although they did not develop such a fruitful relationship as he is proud to have with ELTE. He has been involved in many research projects and programmes with the teachers and students of the Faculty of Informatics, and close cooperation has developed between the two universities over the years. In 2005, he held a course at the Central European Functional Programming School summer school organised by ELTE, which was a great experience for him. What is even more gratifying for him: this award allows him to have further joint work with the university in the future.

The entire event can be viewed on the Vimeo video-sharing platform.