How do owners perceive dominance in dogs? 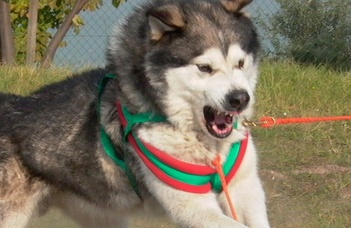 A new study from a team of scientists at the Senior Family Dog Project at Eötvös Loránd University in Budapest Hungary set out to examine how owners perceive dominance in their dogs, and what different behaviours are used to describe dominant and subordinate individuals using a questionnaire.

The term dominant is often used by dog owners to describe dogs, however, there may be little agreement regarding its meaning. Researchers at the Eotvos Lorand University asked owners of multiple dogs: 'Which of your dogs is dominant? Dog A, Dog B, they are similar, or the question is not applicable'. Eighty-seven percent of owners indicated that their dogs differed in their social status and 10% perceived them as similar. Then responders indicated which of the two dogs best fitted with various descriptions. Owners interpreted dominance based on specific behaviours, obtaining resources and certain personality traits, which supports that dominance relationships are robust and well-perceivable components of companion dog behaviour. The list of the most predictive items regarding dominance included: Which dog starts to bark first, eats first, obtains the reward, walks at the front, acquires the better resting place, defends the group, and is more aggressive. Asking which dog wins fights or which dog licks the mouth of the other might also be useful, as both were highly predictive if they did occur, in approximately 70% of cases. Surprisingly, in mixed-sex dyads, females were more frequently rated as dominant than males. The results were published in the open access journal, PeerJ.

The dreaded D word; dominance between dogs living in multidog households
Most owners of more than one dog can describe how their dogs established who has primary access to resources, such as a much-loved toy, the best sleeping place, and who is the first to receive a treat from the owner. Yet, to date no study has attempted to determine whether owners observe the existence of dominance within dogs living in their households. A new study from a team of scientists at the Senior Family Dog Project at Eötvös Loránd University in Budapest Hungary set out to examine how owners perceive dominance in their dogs, and what different behaviours are used to describe dominant and subordinate individuals using a questionnaire.

Defining dominance
When a scientific term becomes a vernacular term, the precision of its definition is usually lost. The concept of dominance in pet dogs is a perfect example. The term dominant is often used by dog owners to describe dogs, however, there may be little agreement regarding its meaning, as dominance is defined differently in ethology, psychology, among the public and in the popular press. So, what do we mean when we talk about dominance between dogs? In ethology, the word dominance is used to describe the long-term social relationships between two individuals (or group), which is established through force, aggression and submission, and serves to determine priority access to resources (such as food, mates, and preferred resting places). The consistent winner is referred to as the dominant, and the loser the subordinate. Once the relationship has been established the subordinate offers submission behaviours such as licking the mouth of the dominant. There is typically no longer a need for the dominant to use force or aggression, and thus the potential for conflict is reduced.

The background: Dominance in multidog households
Once the order of the dominance ranking of individuals is established, it allows animals in a group to determine which one will have access to certain resources without the risk of injury. If the relationships between the dogs are well defined, and competition is low, squabbles and fights rarely occur. The owner is in a unique position, as they observe their dogs daily throughout their lives, and therefore has a wealth of knowledge concerning their dogs’ relationships and interactions. Despite this fact, only few studies have focused on examining relationships of dogs living in the home environment. Other studies describe dominance in free-ranging dogs, dogs living in packs in enclosures, and in neutered pet dogs at a dog day care centre. However, all found evidence for the existence of dominance relationships, even though aggressive interactions were rare, and dominant individuals were often identified through submissive behaviours of the subordinate individuals directed towards them.

Measuring dominance with owner questionnaires
Researchers Eniko Kubinyi and Lisa Wallis at the Senior Family Dog Project surveyed 1156 Hungarian owners of more than one dog, to determine how owners perceive dominance relationships in dyads. Results revealed most owners (87%) labelled one of their two dogs as dominant, describing them as the “boss”. Only thirteen percent of owners were unable to determine a clear rank order between their dogs, which may be because they avoided interactions, they showed affiliative behaviour (interactions that reinforce social bonds, such as play) but no aggression/dominance/submission behaviours, they had not yet established a clear rank order (both were able to “win” battles equally often), the owner actively discouraged dominance behaviours in their dogs (e.g. preventing fights and conflicts), or they did not accept/understand the concept of dominance. Dogs rated as dominant usually have priority access to certain resources such as food, rewards, resting places, they are perceived as undertaking specific tasks, such as “guarding” with barking more, walk in the front during walks (i.e. “leads” the group), defend the group in case of perceived danger, they display dominance: more frequently accept that the other dogs lick their mouth, win more fights, mark over the other’s urination; they have characteristic personality traits: smarter, more aggressive, more impulsive; and they are older than subordinates according to the owners. Physical condition, obedience, sequence of greeting the owner and retrieving balls were unrelated to the perceived dominance.

What might best explain dog to dog social behaviours, age or dominance?
Since previous studies have found that older dogs are more often dominant than young individuals, scientists suggested that dogs might learn the rule “perform affiliative behaviour towards members of the group that are older”. To test this theory, in the current study, they looked at which factor best explained behavioural and demographic differences between the dyads, owner reported dominance rank or age status. The researchers found that dominance status, as perceived by the owner, explained dog to dog interactions better than age. However, when the authors examined only the dyads when a younger individual was dominant, they found that 64% of the dominants licked the mouth of the older individual, which is a sign of submission. Author Lisa Wallis provides an explanation, “the owners may have perceived the younger individual to be dominant, as it was more motivated to obtain resources, perhaps because they were faster/more active, as well as showed higher aggression and impulsivity in comparison to the older dog. Possibly, these younger individuals may have started to test the older dog to establish boundaries. Regardless, there is still a lot to learn about how age differences influence relationships in pet dogs.”

Can understanding dominance improve dogs’ lives?
Owners are responsible for choosing the social partners of their dogs, so they have a duty to try to ensure that relationships are as amicable as possible. For example, in mixed sex dyads, females were often seen as dominant, and showed behaviours that might increase conflict, regardless of age or body size. “This might be because dominant females were more often neutered than dominant males, and previous studies have found that aggression is more frequent in neutered females compared to intact females and neutered males” explained study author Enikő Kubinyi. Competition in these dyads could be reduced if females are kept intact and the males neutered if necessary. Owners could also reinforce the position of older individuals in order to reduce competition and avoid keeping multiple dogs of the same sex and age. “We found great individual differences in dogs’ relationships and hope in the future to examine these more closely and include affiliative aspects as well as long-term changes. It’s important to note that our study represents a snapshot in time in the life of the dogs, and that dog relationships are dynamic and may change according to context and learning.” The authors also emphasize that the study examined owners’ ratings of their dogs and did not attempt to validate these ratings with the dogs’ behaviour in real life situations. Another topic for future research is the relationship of owners with the dogs within their household, and how this might influence the intraspecific relationships between their dogs; a topic which is currently hotly debated.