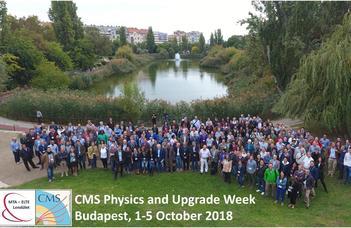 Researchers of the CMS Collaboration renowned for discovering the Higgs boson were hosted by the MTA-ELTE Lendület (Momentum) CMS Particle and Nuclear Physics Group in the first week of October.

The research group of ELTE led by Gabriella Pásztor officially joined the CMS experiment three years ago. It was therefore a great honour for them to win the right to organise the annual conference of the international collaboration involving over 4000 participants. The meeting has been successfully held recently. The one-week programme organised in Budapest, between 1 and 5 October 2018, had nearly 300 participants. Besides reviewing the latest research results in physics, the meeting was primarily summoned to set up short-term and long-term goals. Work on an upgrade to the Large Hadron Collider will be started in December. According to the plans, the energy of the proton-proton collisions will be increased to 14 TeV within two years. The large-scale technological upgrade of CMS facilities has already begun, which is necessary for adapting the detector to the ever-increasing beam intensity. The greatest challenge in these two years is that the analysis of the substantial amount of data that has already been collected also continues, which requires prudent organisation of researchers’ work and all other resources.

“The scientific presentations of the Hungarian participants are also worth mentioning. Members of the MTA-ELTE Momentum CMS group based at the Institute of Physics of ELTE reported on their findings and plans related to the luminosity measurement and the heavy ion programmes. A researcher of the Wigner Research Centre for Physics and a student of ELTE, working at the same institution, gave a presentation on the operation of the particle detector known as a tracker. Young staff members and students had the opportunity to present themselves at a poster session. A young scientist of the HAS Institute for Nuclear Research (ATOMKI) in Debrecen reported on their search for supersymmetric particles.

Five BSc, MSc and PhD students of ELTE and two young scientists of the MTA-ELTE Momentum CMS group demonstrated the broad spectrum of their research,

from correlations between particles produced via strong nuclear interactions in high-energy collisions to their search for supersymmetric particles that can provide answers to questions concerning the source of the dark matter. From the 36 posters, the best four were recognised with a co-operation prize, and to our great pleasure one of these awards was won by a researcher of ELTE for his work demonstrating the detection of multiple patron scattering occurring in proton-proton collisions,” said Gabriella Pásztor, leader of the MTA-ELTE Momentum CMS group, and currently co-ordinator of a working group of the CMS Collaboration committed to luminosity measurements.

The CMS experiment is more efficient than ever: this year, the number of weekly scientific publications increased by 50 per cent compared to the past decade’s average. “This year will also bring new valuable findings: in November, instead of protons, the 208 times heavier lead ions will be brought into collision in the LHC for four weeks in order to study the behaviour of the dense and hot quark soup that filled the universe a few 10−6 seconds after the Big Bang. This data recording, which is the last element in the scientific program of the first ten years, is currently prepared with great care, with the active participation of Hungarian institutions,” said Gábor Veres, university professor, who was co-ordinator of the CMS heavy ion group in 2016.

Those who are interested in particle physics can learn about more interesting facts at the programme “Particle Physics without Boundaries” organized in the Northern Building of the ELTE Lágymányos Campus, on 17 November 2018.

The CMS Collaboration has already accomplished significant achievements. Their research results related to the Higgs boson – including the interaction of the Higgs boson with quarks, or the direct coupling of the Higgs boson to bottom quark – were published in several papers in the past few months. The CMS experiment at the Large Hadron Collider (LCH) of the European Organization for Nuclear Research (CERN) has been collecting and analysing data for ten years, with increasing accuracy. Bringing together over four thousand scientists, engineers, and students, this is one of the world’s largest scientific enterprises. The eight hundredth scientific result of the collaboration was published last week. One hundred of these publications have more than one hundred citations each by independent members of the research community. From the CMS member institutions in Hungary, the Eötvös Loránd University and the Wigner Research Centre for Physics were already leading contributors of the first scientific publication of this kind.

Hungarian scientists are still actively involved both in data analysis and in the technological upgrading and operation of the experiment. Several developments carried out at the University of Debrecen and at the ATOMKI in Debrecen, including the positioning of muon detectors form an important part of these, similarly to the contribution of the Wigner RCP to the semiconductor tracking system. ELTE is involved in the operation of trigger systems employed for real-time data selections, luminosity measurement detectors specialized for measuring data volume, and zero degree calorimeters used in the study of heavy ion collisions.