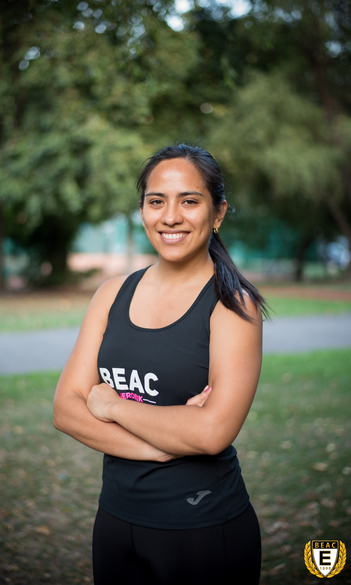 „After I saw them, my first thought was: I want to be part of this team!”- an interview with Andrea, BEAC’s coach from Ecuador

Andrea Aldeán, despite being a Zumba coach at BEAC, is also an intern at UNICEF and she has gotten her master’s degree in social integration at ELTE. Below you can read the interview with our coach from Ecuador.

How did you come to Budapest?

I applied through a bilateral agreement between the Ecuadorian government and the Tempus Public Foundation which provided scholarships to students from third world countries. At first, they refused my application but I decided to apply the next year for the same scholarship. Finally they accepted me in 2017 which allowed me to continue my higher education studies in Budapest. It’s been two and a half years since then.

What did you study here?

I studied Social integration masters at ELTE. To be honest, this was my main motivation to come to Budapest. Right after I saw this master I knew I had to come. The scholarship was for 2 years, but because of work I stayed half a year more, and during that period, I met my boyfriend who is now my fiancé and we’ve decided to stay here longer.

Is your fiancé Hungarian? Are you planning the wedding already?

No, he is from Ghana and he is finishing his MBA at Corvinus University. And yes, we are already planning our wedding, we would like to have a little ceremony in Ecuador and in Ghana too. To be honest, we planned it for this year in August… In Ecuador we still have the appointment for the ceremony but with this pandemic of the corona we are not sure about the next steps to continue with the process. Everything is paused. However, we haven’t given up on these plans, we still have hopes of getting married this year.

Do you speak Hungarian?

Despite the fact of being here for almost two and a half years, I can’t speak the language. During my first months here I was really motivated to learn Hungarian and I even attended a language course. But along with my studies and work, I couldn’t concentrate on the course fully, so I quit. My fiancé doesn’t speak the language either. We only know a few words, and we understand some sentences, but speaking is really hard.

How did you find BEAC?

After a lot of research! I had a sporty lifestyle, as a matter of fact, I was working as a fitness instructor back in Ecuador and I wanted to continue here in Hungary. I was looking for a sports club on the internet, I also asked friends about sports clubs to join. I think I sent more than five emails to BEAC containing different email addresses until I finally found Szilvi Pulay, who supported my application from the beginning. She really wanted me to be part of her aerobic team.

When did you join BEAC?

Spring of 2017 when I replaced Eszti and Szilvi on their dormitory sessions. From 2018 I started my own sessions. But at this point I have one class at dormitory Tétényi and one Zumba session at BEAC.

What kind of aerobics do you do during your sessions?

I do Zumba and Strong by Zumba.

So you mean two types of Zumba?

No, I know it sounds tricky, and many people get confused with it thinking that Strong by Zumba is a dancing class, but it is not at all. Strong by Zumba is a high intensity interval training, which helps you to improve your whole cardiovascular system, to build lean muscle, and to enhance your coordination. The only reason, why they call it Strong by Zumba is because you make the movements with the beat of the music. Actually, the CEO announced that they shall change its official name sometime soon to: Strong Nation.

What sport did you do at home, and how did you find Zumba?

Well... I first need to start at the point when everything started and I think it was when I was 8 years old since I started dancing at that age. In Ecuador, I would mostly teach step aerobic but I usually added some dance movements in the routines. I realized how much my students liked these kind of choreographies. That was the point when I decided to take a course to be a Zumba trainer. So we can say that officially I do these classes since 2016 but I’ve gotten some bases in Pilates and functional training as well.

How often do you go home?

I have been home only once, for a period of 3 weeks during Christmas of 2019. I miss my family a lot.

Have they been here in Hungary so far?

No, not yet, because I have a large family, and the flight tickets are quite expensive. Each one of them cost around 1300 euros. If you calculate this to 9 people (the total number of my nuclear family), it is not cheap at all. However, in 2018 we figured out a way to meet in China with my mom and brother. (laugh) It was much more easier to get there since we didn’t need a visa and the flight tickets were cheaper, so it turned out to be better to meet there than in Ecuador.

Do you have international students at your trainings?

I do have, yes. At dormitory Tétényi I’ve had 8 students from China. When I started at BEAC there were mostly Hungarians during my trainings, but mostly in the dormitories. This past semester, I’ve met many more international students at my sessions. I have a few students from China, Romania, Serbia at the dorms. At BEAC I have students from Norway, Germany, Syria, Kazakhstan, and from Brazil (at least the ones that have introduced themselves to me). Do you want to know what’s the best of having them? That after every training, at least one of them would approach to me and say a big and smiley „thank you for being an international coach at BEAC, it’s easier for us to follow you because of the language”. Most of the Hungarian coaches do their trainings in Hungarian, which is a big difficulty for them.

Are there any international coaches at BEAC apart from you?

At BEAC Aerobic it’s only me and Lili, but she is from Serbia and she speaks Hungarian. But if you ask me for all BEAC trainers then that’s a good question, because I’m not sure.

Do you find it important that foreigners should be part of BEAC?

What do you like the most in BEAC? What do you think, why is it different than the other teams?

I think BEAC called my attention from the very first time I stepped in the building. I got to experience their events during a spring festival in 2017. I was amazed by the amount of sports they put out there, like spinning, yoga, aerobic, boxing, TRX, football... there were other sports that I wasn’t even familiar with. I was so excited to meet such an active team like them. After I saw them, my first thought was: I want to be part of this team! They enchanted me at first sight.

How do you find the online trainings? Do you have any difficulties in it?

The online sessions are interesting challenges for me! Especially during the first weeks because I’ve had problems with my internet connection and my laptop doesn’t work sometimes. And imagine this, once, in the middle of my session, my flatmate’s cat jumped on top of my laptop and blocked completely the visibility of my webcamera. I couldn’t believe it! I was so embarrassed... So yes, there are some difficulties with the online trainings for me, problems that you might not encounter during the trainings in person. I’ve tried my best and I even asked for my fiancé’s and my flatmate’s phone to see if they would work better, but it didn’t work much. Despite all these issues, I’ve always tried to do my best to make my lessons enjoyable.

Now, if I could choose the class that challenges me the most, I would say it is the Strong by Zumba one since it requires a lot of technique and concentration from the participants and if I do not see my students, it’s hard. I should see them and how they do the exercises, correct them, tell them what to pay more attention to because the last thing I want to happen is that they would injure themselves. Although I try to warn them regarding the correct knee position or straight spine, or torso it is still challenging. So there are things I could easily direct in person, but online it’s tedious. And I believe it’s not only a struggle for trainers but for the students as well. Regardless of all these, I think we will get used to it with time, perseverance, and patience.

What are your plans for the future?

A lot of people ask me this. I’ve noticed that I like to plan ahead but I’m also super spontaneous. On top of this, I’m a Christian believer, which means I can accept if something doesn’t turn out as I expected. But if God helps me and my plans, I would be glad to stay in Budapest. Also we (my fiancé and I) could imagine our lives in England, or maybe in Canada. I would love to continue as a trainer, and regarding to my studies as a social integration counsellor I would like to deal with international students, or even with multicultural couples. It would be the best if I could run my own business in this case! If not, I would like to continue at UNICEF, right now I am an intern there, but it would be nice if I could work there as a full-timer.

The interview was made by Anita Vidu.