News findings in the molecular background of skin cancer 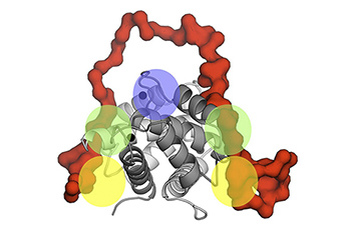 Results of the joint research of Eötvös Loránd University and the Hungarian Academy of Sciences are published in the current issue of the Journal of Biological Chemistry, journal of the American Society for Biochemistry and Molecular Biology.

Malignant melanomas are among the most aggressive and heterogeneous tumors that are usually resistant to conventional chemotherapy, therefore any targeted therapies are highly desirable. In the current issue of the Journal of Biological Chemistry, selected as a “Papers of the Week”, the collaborating research groups of Laszlo Nyitray (Eötvös Loránd University, Budapest, Hungary), Attila Reményi (Research Center for Natural Sciences of theHungarian Academy of Sciences), and Gergely Katona (Gothenburg University, Sweden) with first author Gergő Gógl (a joint PhD student of Drs Nyitray and Reményi), presented results describing a novel protein-protein interaction that may be such a future therapeutic target for treating melanomas. Their studies revealed the structural basis of a crosstalk of the Ca2+- and mitogen-activated protein kinase (MAPK) signaling pathways. They characterized, by various biochemical and structural biology methods, the interaction of a vertebrate-specific calcium-binding protein S100B with RSK1, a MAPK-activated protein kinase, which is a downstream effector of the Ras/MAPK pathway involved in controlling cell proliferation and very frequently mutated in melanomas. An interesting structural biology aspect of the published results is that the two proteins form a so-called fuzzy complex with high structural disorder. Such complexes might be abundant in nature, however, only a few have been characterized yet in detail.  S100B has been used as a diagnostic marker for long time, and inhibitors directly targeting it are in clinical trials for treating malignant melanomas. The structural study of the S100B-RSK1 complex revealed a novel interaction surface on S100B that could facilitate the design of even more specific small molecule drugs to fight these aggressively metastatic tumors.

The Papers of the Week in the Journal of Biological Chemistry, one of the most prestigious journals since 1905, are selected by our Associate Editors and Editorial Board Members as representing the top 2% of JBC papers in overall importance. The papers are accompanied by a brief summary that explains the findings of the paper and why it was chosen for this honor. The first authors of the selected papers are presented in a special section. The first author Gergő Gógl is introduced under his author profile.