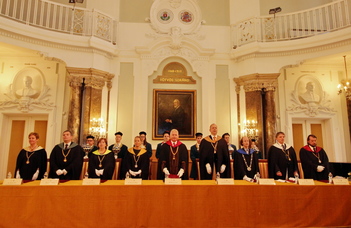 On 9 November 2018, the Senate of the Eötvös Loránd University awarded the title “Professor et Doctor Honoris Causa” to Rainer Weiss, Nobel laureate astrophysicist and founding leader of the LIGO Scientific Collaboration, which was the first research group that, in contribution with ELTE, observed gravitational waves. The other recipient of honorary doctorate was Georg Gartner, cartographer. The ceremonial general assembly was chaired by László Borhy, academician and Rector of ELTE. The Mixed Choir of the ELTE Department of Music participated in the event.

In his speech opening the general assembly, László Borhy, Rector of ELTE, welcomed the ambassadors, state officials, and representatives of other universities, as well as the former recipients of honorary doctorates, professors emeriti, and the current teachers, researchers, and students of ELTE. According to tradition, László Borhy greeted the candidates not only in Hungarian but also in Latin. He subsequently invited leaders of the nominating university faculties – Professor Peter Sziklai, Acting Dean of the Faculty of Science, and Professor Zoltán Horváth, Dean of the Faculty of Informatics – to hand over the honorary doctorate degrees to Rainer Weiss and Georg Gartner following the laudations.

In 1972, Rainer Weiss had already observed that laser interferometers should be used for the detection of gravitational waves. Until then, physicists tried using so-called mass resonators to detect waves; however, the sensitivity of the instruments could not be increased to the necessary extent. Interferometers with long arms proved to be better solution. Weiss participated in designing and constructing the LIGO instruments. Since 2000, he has been involved in their operation and development. In 2015, the observation of the gravitational waves by LIGO topped off his life work. For this achievement he received every major award in astrophysics and cosmology, including the Nobel Prize in Physics in 2017.

The professor followed closely and

continuously supported the activity of the LIGO working group at ELTE, particularly the development and installation of infrasound microphones

at the LIGO sites, in the USA. He visited our university (on the occasion of a LIGO workshop) in 2009. He is generally positive about our work. He was also willing to participate in two Hungarian footages recorded in Budapest and at the MIT in Boston. He is founding leader of the LIGO Scientific Collaboration (LSC). The working group of ELTE joined LSC in 2007. Since then, ELTE and LSC have annually renewed their Memorandum of Understanding, which has resulted in more than 100 scientific articles with over 500 cumulative impact factors co-authored by scientists of our university, which have received more than 10,000 citations. In the framework of this co-operation, not only the professors and researchers but also the master’s and doctoral students from ELTE visited Boston (MIT) and Pasadena (CalTech) several times. Our relationship with Rainer Weiss is therefore of fundamental importance regarding both our research and the possibilities of our students. Rainer Weiss still supports and helps the development of the instrument designed at the ELTE Faculty of Science for collecting infrasound data, which is of considerable relevance to the issue of so-called gravity gradient noise. The significance of the results of ELTE in this matter was also emphasised by the professor in his Nobel lecture delivered at the University of Stockholm.

In his thank-you speech, Rainer Weiss drew attention to the connection of science and curiosity: similarly to Einstein’s vision, today’s scientific investigations are driven by curiosity. An idea emerges, which is followed by experiments, and ideally the assumption proves to be correct. “Since the observation of gravitational waves, we have seen the universe in a whole new light,” said the professor. “The positive confirmation of theory in practice is a very important step from the aspect of future research.” He emphasized that we should always ask ourselves what the purpose of our research is, but

being scientists, we also have to maintain our curiosity throughout our lives.

The professor said that one of the main goals of LIGO investigations in the future will be to understand what the gravitational waves tell us. In this process, the ELTE research group has already occupied a crucial role, and – as it can be expected from scientific collaborations – will certainly act the same in the future, as well.

Georg Gartner did his degrees in cartography and geography at the Vienna University of Technology. He obtained his doctorate and habilitation from the same university. Since 1991, he has been working at the university, where he has led the Research Group of Cartography since 2004. From 2008 to 2014, he was Dean of the Faculty of Mathematics and Geoinformation at the university. His most important international scholarly activity is related to the International Cartographic Association. He took part in several projects of the association (Maps and the Internet, Preservation of Cartographic Heritage, and Location-based Services).

numerous conferences were held with his participation, which provided excellent opportunities for specialists at ELTE.

In 2004, researchers of the ELTE Faculty of Informatics attended the conference titled Location-based Services initiated by him. They also delivered papers at the first Cartography and Art workshop in 2008, organised by cartographers in Vienna led by Gartner. Additionally, they participated at the First ICA Symposium on Cartography for Central and Eastern Europe in 2009, and the EuroCarto symposium held with great success in 2015. The lecturers and PhD students of ELTE also took part in organising some of the Association’s major events. Georg Gartner also gave a keynote lecture at the Cartographic Scientific Day held by the Cartography Subcommittee of the Social and Physical Geography Committee of the Section of Earth Sciences at the Hungarian Academy of Sciences for the first time in 2015.

Following the laudation, Georg Gartner emphasised the importance of commitment and knowledge, as well as the relationship between these two. According to him, it is a great honour to receive an honorary doctorate from such an old university with a great tradition, not only as a scholar and cartographer, but also as a person coming from Central Europe. The professor also called attention to the significance of human curiosity, since

this is what keeps researchers engaged and research in motion.

The title of honorary doctorate also highlights the fact that co-operation is particularly important in research, as this is how we can get answers to burning questions raised by mankind. Cartography, the professor’s own field of research, demonstrates this well. Fruitful collaborations that started in the past will hopefully continue in the future, which is in any case facilitated by the proximity of Vienna and Budapest, the hometowns of the two universities.

The ceremonial concert and dance performance given in honour of the honorary doctors at the Aula Magna Ceremony Hall started at 6 p.m.; they were performed by the ELTE “Eötvös” Art Ensemble.