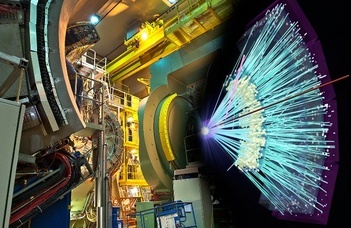 Researchers at PHENX revealed an interesting phenomenon: signs of the Levy-flight (that also appears in the movement of sea predators and at stock market) were seen in the particle-emitting quark-soup created in heavy-ion collisions.

Experiments done at high-energy particle accelerators – at the Relativistic Heavy Ion Collider (RHIC) and the Large Hadron Collider (LHC) – suggest that the matter created in high energy heavy ion collisions is an almost perfect fluid, called the quark-gluon plasma. This matter was also present in the early Universe, a few microseconds after the Big Bang.

This primordial soup can be recreated in heavy-ion collisions where the temperature is so high that the nuclei melt. As the quark soup cools down, in the fraction of a second a bunch of different particles are created from it, flying out in every direction.

These particles are observed by complex detector systems like the PHENIX experiment.

The space-time structure of the quark matter can be explored by quantum statistical techniques. The essence of this method is that the momentum correlations of the particles reveal the structure of the source from which they were created. These measurements suggest that the size of the created matter is on the scale of femtometers (10-15 m), so this field of science is also called femtoscopy.

Scientists at PHENIX based their femtoscopic studies on a process known from very different fields of science, called the Lévy-flight. They showed that the particles created from the quark matter can fly long distances without changing direction, so they move like sharks searching for fish swarms. This process is also called anomalous diffusion, and it can result in a heavy-tailed source distribution, the Lévy-stable distribution. These new measurements give a much more precise description and provide access to a lot of additional information. According to the reviewers,

the recent PHENIX paper can become an important milestone as it opens a new chapter in femtoscopic studies.

These PHENIX results, published in Physical Review C last week, were reported at the recent Workshop on Particle Correlation and Femtoscopy (WPCF) in Cracow, Poland, at the end of May 2017, where PHENIX also presented preliminary results on the centrality, collision energy and system size dependence of similar measurements. The CMS collaboration also published a supporting result at CERN LHC in pp, pPb and PbPb collisions from 0.7 to 7 TeV, in the same issue of the Physical Review C, by fixing the Levy power-law exponent to 1. Furthermore, at the WPCF conference the CERN SPS NA61/SHINE collaboration also reported their first results on a Levy-stable analysis of Bose-Einstein correlation measurements.

The high precision measurements of the PHENIX experiment was also used to test earlier results that indicated the mass modification of twin particles eta and eta' in hot and dense hadronic matter. In their usual state, the masses of these particles are almost a factor of 2 different, due to the special quantum field theoretical couplings of one of them, the eta'. Theorist long expected that at sufficiently high temperatures, the properties of these two twin particle states will be nearly identical. The recent PHENIX results were found to be not inconsistent with the scenario of an in-medium mass reduction of the eta' meson. This effect can be illustrated with the birth identical twins. who have similar masses when they are born, but by the time they both grow up, one of them acquiring twice as heavy mass as the other, slimmer pair.

The new results will likely be followed by future analyses that also aim to search for the Critical Point on the phase landscape of the strongly interacting matter. At the Critical Point point, the particle emitting source is expected to develop its heaviest tail, and the new PHENIX results demonstrate that the power law exponent that characterizes such a heavy tail can be experimentally measured.