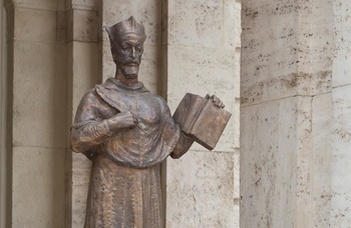 The Senate of the University hands out “Doctor et Professor Honoris Causa” awards at the General Assembly.

Zsigmond Ritoók was born in 1929. He graduated as a teacher of Latin and Greek from the ELTE Faculty of Humanities. Later, in 1965, he obtained his degree from the same university as a secondary school teacher of Hungarian language and literature. Beginning with 1952, he worked as an assistant lecturer at the Department of Greek Language and Literature, and next he taught at the Martos Flóra Secondary Grammar School in Óbuda. Subsequently, he returned to ELTE, and worked as a research fellow of the Classical Studies Research Group of the Hungarian Academy of Sciences. In 1986, he was elected a full professor at the Department of Latin Language and Literature. Between 1987 and 1993, he was head of the same department. He retired from ELTE in 1999. He continuously published papers on ancient Greek and Latin poetry, Greek aesthetic thinking, and the history of Hungarian classical philology. Since 1993, Zsigmond Ritoók has been a full member of the Hungarian Academy of Sciences, and has been awarded the degree of Honorary Doctor by Hungarian and foreign universities. In 2001, he won the Széchenyi Prize. In 2008, he received the Commander’s Cross with Star of the Order of Merit of the Hungarian Republic. In 2009, he was given the Bolyai Prize, one of the most prestigious scientific awards in Hungary. In 2018, he took the Hungarian Corvin Chain Award.

On the day of the celebration, a concert and dance performance will be held in honor of the honorary doctors at Aula Magna at 6.00 p.m.

Programme of the concert and dance performance

Claus von Carnap-Bornheim is a researcher of European reputation specialized in the archaeology of the Barbarians in the Roman Imperial Period, as well as a museum organizer, and a full member of the German Archaeological Institute. His investigations are focused on the culture, social organisation, economy, daily life, and extended connections of the Barbarians (Germanic and Baltic peoples, Iranian Sarmatians, and nomadic peoples from the Eurasian Steppe) living on the edges of the Roman Empire. Since 1985, he has been a member of the research team processing the world-famous finds discovered at the sacrificial bog-sites of Illerup, in Denmark. The professor also organises research and teaching fellowships for young scholars coming from East Central and Eastern Europe, including the faculty members of ELTE. His most outstanding achievement in the field of scientific management was the establishment of an innovative archaeological and historical research institute, the Zentrum für Baltische und Skandinavische Archäologie im Archäologischen Landesmuseum Schleswig in 2008. He was a guest professor at universities in our region, including ELTE, and played a major role in promoting research in Eastern Europe by bringing together scholars working at different archaeological institutions.

Marc Nicholas Potenza is a psychiatrist and addictologist, as well as the founder and leader of several research teams at Yale University. He has been investigating addictive behaviours and disorders, dependence on psychoactive substances, and gender-related differences in the processes for over twenty years. He is a clinician-researcher exploring the intergenerational aspects of addiction, including exposure to drug during the prenatal period. His fields of research encompass the study of impulsive-compulsive disorders, investigations of video-game playing addictive behaviours, as well as hypersexuality. He has been working closely with the Department of Clinical Psychology and Addiction at the ELTE Faculty of Education and Psychology for many years now. He participated in launching the Journal of Behavioural Addictions at ELTE in 2011, which has become a leading journal in the field of addictology. Furthermore, several professors and doctoral candidates of the faculty were successfully involved in his research projects. He has received many prestigious awards for his work, and authored or co-authored more than 400 journal articles.

Rudolf Welser is an internationally renowned expert of private law in Central and Eastern Europe. In 1971, he was elected a full professor at the University of Vienna, and he was the chairman of the prestigious Institute for Civil Law for nearly four decades. Between 1981 and 1983, he was Dean of the Faculty of Law at the University of Vienna. His scholarly interests are focused on contract law and inheritance law, but he has also addressed several other important questions related to private law. The two-volume monograph on Austrian private law, authored by him and Helmut Koziol, an Honorary Doctor of our university, is of paramount importance. Rudolf Welser has greatly contributed to the legislative preparatory work of the Austrian Ministry of Justice with his expertise. His studies submitted to the reforms of the law of warranty and guarantee and the law of inheritance in the Civil Code of Austria are also highly significant. In 2007, he founded the Centre for European Legal Development and Private Law Reform, which aims primarily at comparing the development of the different systems of private law in Central and Eastern Europe. Several Hungarian professors are involved in the work of the research centre, mainly from our university.

Charles Withers is one of the most distinguished British geographers, fellow of the British Academy and the Royal Scottish Academy. In addition to other professional awards, he is holder of the title of Geographer Royal for Scotland that was conferred on him by the British monarch and the Scottish Parliament in 2015. He is the only scholar to hold this recognition. He defended his doctoral dissertation at the University of Cambridge in 1981. Between 1980 and 1994, he was a lecturer at the Cheltenham and Gloucester College of Higher Education. Since 1994, he has been a professor at the University of Edinburgh. His fields of research encompass cultural geography, historical geography, and the history of geographical science. He has authored outstanding publications on the history of science during the Age of Enlightenment and geographical science in the nineteenth century. He is the author or co-author of more than ten monographs. Charles Withers has worked with the researchers of the Institute of Geography and Earth Sciences at the ELTE Faculty of Science in the fields of historical geography and the history geographical science for decades. The professor is a recurrent guest in Budapest. He has attended several international conferences and professional events organised by our university.