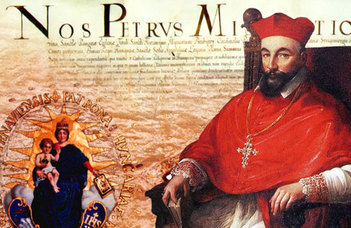 On 7 May 2021, the ELTE Senate holds a festive general assembly once again, to commemorate the 1635 foundation of the university by Péter Pázmány.

The opening speech of the ELTE Senate’s festive event is going to be presented by László Borhy, academic and ELTE’s Rector. The ELTE Béla Bartók Choir will contribute to the program, conducted by László Kovács, Liszt Prize-winning conductor and excellent artist. Due to the epidemiological situation, the ceremony is going to be held as an event streamed online.

Every year, on Pázmány Day, the “Pázmány Lecture” is delivered by a professor at the university  who has accomplished extraordinary achievements in his/her field of research. The lecture series started in 1991, and this year’s next lecturer is Katalin Tausz, Professor Emerita at the ELTE Faculty of Social Sciences, former Dean of the Faculty. She will hold a lecture titled “Visible and invisible children”. The lecturer will be awarded the this year as well.

Katalin Tausz earned her degree in sociology in 1979 and has been a lecturer at ELTE since 1978. From 1997 to 2011, she was the Head of the Department of Social Policy, and from 2009 to 2015 she was the Dean of the Faculty of Social Sciences. In 2015, she was appointed a university professor. Her field of research is social policy, with a special focus on social inequalities, the support of the disadvantaged and their social integration, the situation of people living with disabilities, and the functioning of the social care system. Her work in exploring the causes of poverty, including child poverty, and its possible solutions is particularly outstanding. Her teaching activity has had a major impact on the training of the younger generation of social scientists, as well as struggles against child poverty and inequality. Between 2016 and 2019, she was the director of children’s rights at the UNICEF Hungarian Committee Foundation.

Her presentation will focus on children from disadvantaged families who are invisible to public policy makers and to the statistics available to the public, or more precisely, who are ignored, only noticed when they become people with low level educational backgrounds, who are unemployed or undeclared employees, sometimes living in a way deemed deviant by society. Katalin Tausz's starting thesis is that everything is the same during the pandemic – but now we see the world through a distorted glass. In other words, nothing has happened that we have not known so far, only now have the institutions, including the disorder in the social protection system, become more visible. The effects of the epidemic on children can be examined from different perspectives (poverty, physical and mental health, education, domestic violence, access to services), the presentation will primarily focus on child poverty based on data from EUROSTAT and the Hungarian Central Statistical Office and reports from professionals working with children, literature and press reports.

ABOUT THE Honorary doctors

Johannes Hahn is a professor at the University of Münster. His fields of research are the Age of the Roman emperors, the cultural, religious, and social history of Late Antiquity. Within the history of religion, the history of Judaism and early Christianity constitute the main subject of his works. Another focus area is early Hellenism in the eastern Mediterranean, as well as ancient medical history. He studied philosophy, history, and archaeology at the Universities of Munich, Heidelberg, and Oxford. In 1986, he earned his doctorate in Heidelberg as a student of Géza Alföldy. Subsequently, he became a staff member at his professor’s department. After his habilitation, he left for the University of Münster as a university professor. He is one of the editors of the international series Studien und Texte zu Antike und Christentum, Historische Studien, and Religions in the Graeco-Roman World. He has multiple connections with Hungary and ELTE. Before the launch of the Erasmus network, he had already hosted many students and university colleagues in Münster arriving from Budapest and gave several lectures at the ELTE Institute of Archaeology. In 2015, he came to Budapest as a visiting professor.

John T. Jost is one of the most widely known, most published, and most decisive political psychologists in the world today. He earned his degree in psychology from Duke University in 1989 and received his PhD at Yale University in 1995. He has been a professor at New York University since 2008. He is the author of five books and nearly 400 publications, with over 40,000 citations. He developed the Theory of System Justification, according to which people are motivated to defend, explain, and maintain the current social, economic, and political system for their sense of security. His most cited study explores the processes of motivated cognition that define political conservatism. Since 2010, he has been working closely with the staff of the Department of Social Psychology at ELTE, which resulted in several joint publications, and he was a guest lecturer at the Faculty of Education and Psychology on several occasions. Intense cooperation with him has considerably fostered the development of the study of social psychology and the international collaboration activities of the Faculty.

Francisco Pina Polo is a professor at the University of Zaragoza. He is an internationally renowned researcher of the history of the Late Republic of Rome, the operation of political practice and the institutional systems of politics, as well as the role of orators giving speeches to the public. He is a member of the classicist workshop simply referred to as the “School of Zaragoza” by the scholars of Classical Studies in Spain. He received his PhD from the University of Zaragoza in 1988. Since the beginning of his career, not only has he regularly published his studies and books in German and English in addition to Spanish but has also been a lecturer at prestigious conferences. As a scholarship holder, researcher and visiting professor, he has often visited major classicist workshops around the world. In 1994, 1998, 2002, and 2016 he was a visiting professor at the ELTE Department of Classical Archaeology. In the framework of the Erasmus bilateral agreement, students from Zaragoza came to ELTE regularly, and ELTE students were invited to Zaragoza for one semester each.

Andreas Voßkuhle studied law in Munich and Bayreuth. Since 1999, he has been a professor at the Faculty of Law of the Albert Ludwig University [I4] in Freiburg and was the dean of the Faculty from 2004 to 2006. He has been an ordinary member of the Berlin-Brandenburg Academy of Sciences since 2007. In the same year, he was also elected rector of the Albert Ludwig University – as the youngest professor ever. In 2008, he was elected a member and vice-president of the Federal Constitutional Court of Germany, and from 2010 to 2020 he was – again the youngest ever – president of the court. His professional work covers several areas of public law. He publishes his works in the fields of constitutional law, administrative law, and public administration, as well as the philosophy of law at an equally high level. He is a key player in the scientific process aimed at the renewal of public administration in Germany, and he also plays a major role in the development of the study of German constitutional law. Since he was elected a judge of the Federal Constitutional Court, he has been the main promoter of a constitutional dialogue. He has always been committed to the advancement of constitutional justice in Hungary and has had a close professional relationship with the Constitutional Court of Hungary.

Download the bilingual brochure of the Pázmány Day here.