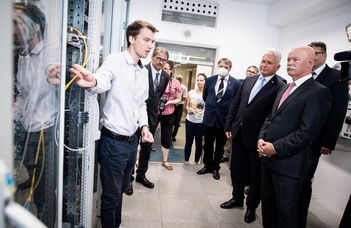 HU
“Hungary is in great need of developments in quantum computing,” said János Csák, Minister of Culture and Innovation, at the presentation.

At the presentation of quantum information hosted by ELTE Faculty of Informatics on 26 July, the researchers demonstrated how to share the encryption keys between the Lágymányos and Trefort Garden Campuses of the university in a physically safe way on the traditional fibre-optic telecommunications network using a quantum-based method of key distribution. The aim of the demonstration was to test the commercially available IDQuantique devices using photonic quantum key sharing and encryption based on that. What makes the development critically important is that some of the current encryption procedures protecting our data may soon become obsolete and hackable with the emergence of quantum computers. As a result, quantum encryption is of fundamental importance for financial and economic networks, among other things.

János Csák, Minister of Culture and Innovation, congratulated the researchers on their achievements and emphasised that Hungary is in great need of developments in quantum computing carried out in the country and the scientific outputs should be later implemented for making products as frequently as possible. “At the end of the day, the beneficiary is always the one who has control over the product, and quantum informatics and quantum communication are currently the leading technologies globally,” he said.

“The country is able to contribute to software development in the field of quantum technology, where it may achieve a decisive role,” pointed out academician László Borhy. According to the Rector of ELTE, the quantum processor acquired at the end of last year by the Faculties of Informatics and Science will be one of the main tools for competitive basic and applied research, supporting the enhancement of the university’s scientific impact and its international visibility in the field of quantum informatics.

The freely available Piquasso simulator, developed by Tamás Kozsik and his research group at ELTE Faculty of Informatics, is one of the best tools of its kind in the world in terms of its effectiveness. In terms of some calculations, this application is up to four times faster than the currently market-leading simulator developed by the Canadian startup Xanadu.

In 2019, the European Union launched the European Quantum Communication Infrastructure (EuroQCI) initiative, and Hungary has also joined it. This year, the QCIHungary consortium (coordinator: Government Infrastructure Development Agency, members: BME Faculty of Electrical Engineering and Informatics, ELTE Faculty of Informatics, Wigner Research Centre for Physics, partners: Telekom Hungary, Vodafone) won the bid to lay the foundations of the national quantum communication infrastructure in Hungary. The long-term ambition of Hungary is to join the pan-European quantum internet network to be established within ten years.