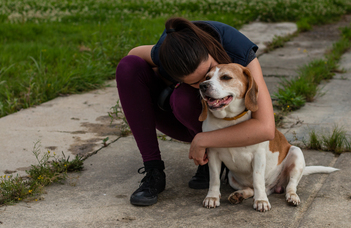 Has your dog a hard time when left alone? It whines, barks continuously, defecates or urinates in your apartment or damages your flat or belongings? It probably has separation anxiety. But what might have made it to develop this problematic behaviour? The researchers of the Department of Ethology at Eötvös Loránd University investigated a possible cause in their latest study published in Applied Animal Behaviour Science.

“Besides personal experience, genetic and hormonal factors, there might be several other factors, which could play a role in the development of separation anxiety. Here we investigated one possible factor, the nature of the relationship with the owner.” - said Tamás Faragó research fellow (Premium Postdoctoral Fellowship, Hungarian Academy of Sciences) at the Ethology Department, and the leader of this study.

The dog-owner relationship is affected by the attachment, which, in ethological sense, is the phenomenon when we seek for others’ closeness, and in the lack of this closeness we show stress related behaviours. In most species, this phenomenon can be observed in offspring’s attachment towards the mother.

As an effect of  domestication dogs develop a similar attachment towards the owner, as children to their mother:

in the absence of the owner, dogs exhibit stress related behaviours ( “separation stress”), and at reunion they greet their owner joyfully and try to stay close.

“However, in case of children we know that the picture is more complicated: different attachment styles emerge in the child depending on how and to what extent their mother provides safety and predictability” - stated Veronika Konok research fellow (CELSA project), and one of the authors of the study.

If the mother responds to the children’s signals and emotional (attachment-related) needs in a predictable way, then the children likely develop a secure attachment style, which means they will trust in others and feel safe. Nevertheless, if the mother is responding unpredictably (not responsive), then the children might develop an insecure attachment style: they would avoid intimacy, because they don’t trust others (avoidant attachment), or they would constantly fear of being abandoned and rejected (anxious attachment).

Not surprisingly, separation anxiety which is an existing psychological disorder in the case of the children too,  is more likely to develop in  children with insecure-anxious attachment style than in secure or insecure-avoidant children.

We also know that the responsiveness of the parents depends on to what extent they have developed secure attachment during childhood. This means that as a parent we unintentionally transmit our attachment style to our children. As owners, do we do the same to our dogs  owners? And do dogs have similar attachment styles as humans? If yes, is separation anxiety specific for insecure-anxious dogs?

“To answer all these questions, we asked 125 owners to fill out a questionnaire about their dogs’ behaviour during their absence and reunion, and how much they are worried when they leave their dog alone” - said András Marx PhD student, and an author of the study.

Using a statistical procedure, which tries to identify distinguishable classes in the data, the researchers attempted to group the dogs based on their attachment-related behaviours (separation and reunion), and the feelings of the owner about leaving their dogs alone, and they investigated whether  these classes match the secure, insecure-avoidant and insecure-anxious attachment styles observed in humans.

About the results András Marx told us: “We could distinguish the secure, and the two insecure attachment styles in the case of the dogs as well. Interestingly though, the securely attached dogs formed two groups which were only different in the owners’ feelings regarding separation”.

As expected, separation anxiety was most frequently reported in the insecure-anxious group. These are those dogs who express to the owner and the neighbourhood that they do not like to be alone in a clearly noticeable or audible way.

However, this study also showed that in dogs (like in children) there are individuals that suffer in silence: they do not bark or whine, do not damage the house, but their physical symptoms show that they experience high level of stress when they are left alone - they might be dogs with insecure-avoidant attachment. Due to the silent suffering, it is hard to notice these dogs’ separation anxiety. Accordingly, most of their owners did not think that their dog might have separation issues.

In the case of the insecure-anxious and the insecure-avoidant dogs, the owners were not that worried about leaving their dogs alone. In several cases they did not even think of their dogs’ behaviour as problematic, which might derives from, besides other explanation, that these owners might have an insecure-avoidant attachment style. “In an earlier study we also found that

If the owner is not responsive, they do not react to the dogs’ signals, then the dog could not develop the feeling of safety” - explained Veronika Konok.

“We have to emphasise that we do not state, that there are problems with the owners’ responsiveness in every case of separation anxiety in dogs. But we would like to raise awareness on this phenomenon, that despite of the popular theory, suggesting that these dogs are hyperattached to their owner and the best treatment is to ignore their need for contact, in many cases safety and predictability could be more important for them. We have to keep in mind, that just like in the case of a parent-infant relationship, the dogs’ attachment behaviour is also intertwined with the owners’ own attachment behaviour” - stated Tamás Faragó.