Social Traumas Living with Us 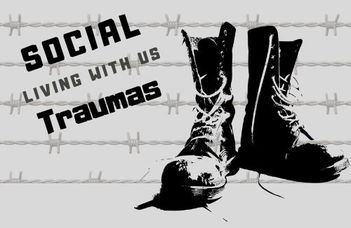 The course fee - that includes tuition fee, accommodation (student residence halls with shared rooms 2-3/ room), meals (breakfast and lunch for each day), local transport and the cost of the leisure time programs - is 470 EUR. All applicants are required to pay 70 EUR (out of this 470) as registration fee within 15 days of submitting their application. The registration fee is non-refundable.

Credits: 3 EC
Our courses offer ECTS points, which may be accepted for credit transfer by the participants' home universities. Those who wish to obtain these credits should inquire about the possible transfer at their home institution prior to their enrollment. The International Strategy Office will send a transcript to those who have fulfilled all the necessary course requirements and request one.

The Summer University on Social Traumas Living with Us is built around ongoing research examining the transgenerational social trauma of the second and third generations of Holocaust survivors.

This summer school program was initiated and designed by ELTE FSS’s Social Traumas Research Group. The series of lectures and seminars will focus on the special types of social traumas, such as: cultural traumas and historical traumas, conceptualized in the frame of social sciences.

In our understanding cultural trauma occurs when members of a collectivity feel they have been subjected to a horrendous event that leaves indelible marks upon their group consciousness, marking their memories forever and changing their future identity in fundamental and irrevocable ways (Alexander 2012). From feminist perspective, cultural trauma, like patriarchy, gender, or sexual difference which has a horrific influence on cultures, can encompass traumatically the collective identity of male and female characters (Quiros – Berger 2015). Feminist theory contributed significantly to the field of trauma by challenging psychiatry’s deficit focus, extending the understanding of trauma to include multiple conditions, and raising the voices of traumatized groups of both genders that have been left out of the discussion (Burstow 2003). All feminist theories share basic assumptions of women’s subordination in a hierarchical male-dominated society, that is, a belief that ‘‘women universally face some form of oppression or exploitation’’ (Maguire 1987, 79).

Sztompka (2000) speaks about social trauma in the context of social change and draws on the Merton’s notion of anomie, Beck’s and Giddens’s concept of risk. In his view the word 'trauma', no longer confined to hospitals and psychiatric wards, but a new discourse is born, the discourse of trauma, and it has slowly entered the domain of social sciences and the humanities (Caruth, 1995, 1996; Neal, 1998). One possible use of the concept of trauma is to deal with the problem of negative, dysfunctional, adverse effects that major social change may leave in its wake, the 'trauma of change' inflicted on the 'body' of a changing society. To apply the concept of trauma to the social domain we look for destructive effects on the body social. What could it mean in that context? Trauma would indicate a specific pathology of the agency. 'Agency' is of course a concept with multiple meanings, but in the theory of social becoming it is understood as a complex, synthetic quality of human collectivity allowing for its creative self-transformation (Sztompka, 1991). The trauma on which we focus is a peculiar type of social change. There follows a tentative and random list of social changes of various magnitude and importance meeting this description, and therefore likely to initiate cultural trauma:

Contrary to Sztompka’s cultural trauma notion the historical trauma, defined as the “cumulative psychological and emotional wounding across generations... [emanating] from massive group trauma” (Brave Heart, Chase, Elkins, Altschul 2011, 283). Starting in the 1960s, knowledge of historical trauma emerged from the stories of those who endured the Holocaust and its impact on subsequent generations, as well as e.g. the experiences of Japanese Americans placed in internment camps after World War II (Evans-Campbell 2008; Sotero 2006).

Historical social trauma, as used by social workers, historians, and psychologists, refers to the cumulative emotional harm of a community or generations caused by a traumatic experience or event. Historical Trauma Response (HTR) conception refers to the reactions that individuals and communities experience as a result of long-term oppressive events (Brave Heart, Chase, Elkins, Altschul 2011). Some HTRs include survivor’s guilt, depression, intrusive thinking about past events/loved ones, emotional numbing, dissociation, and unpleasant thoughts/nightmares (Evans-Campbell 2008).

National traumas have been created by “individual and collective reactions to a volcano-like event that shook the foundations of the social world” (Neal 1998, ix). An event traumatizes a collectivity because it is “an extraordinary event,” an event that has such “an explosive quality” that it creates “disruption” and “radical change . . . within a short period of time” (Neal 1998, 3, 9–10).

Scholarships concluded that the manifestations of trauma, although produced by different events and actions, are exhibited in similar ways within each afflicted community.

What is social trauma and why we have to research it? Snapshots on ongoing research on 2nd and 3rd generation Holocaust survivors' traumas- Agnes Kövér-Van Til and Zoltán Haberman

There and then… Survival stories- Júlia Vajda

(We reserve the right to change the program)

REQUIREMENTS FOR THE COURSE PARTICIPANTS

Quiros, L. – Berger, R. (2015) Responding to the Sociopolitical Complexity of Trauma: An Integration of Theory and Practice. Journal of Loss and Trauma, 20:149–159.

The application form is available on this link.

Information on fee and refund