The inflorescence of sunflowers (Helianthus annuus) faces constantly east and no longer follows the celestial motion of the Sun after anthesis, an intriguing phenomenon that already captured Charles Darwin and his botanist son’s interest. Although several explanations have been suggested for this phenomenon over the years, none of them has been tested experimentally. Hungarian researchers proposed a new environment-optical explanation for the east facing of mature sunflower inflorescences in the December 2020 issue of Scientific Reports.

The leaves and the immature non-flowering head of common sunflowers (Helianthus annuus) continuously change their orientation so that they always face approximately normal to the incoming solar radiation throughout the day. At sunset, the immature head faces nearly west, while at night it reorients itself and turns nearly east before sunrise. This periodic daily motion is called heliotropism. The orientation of the head and leaves follows the celestial motion of the Sun with a delay of about 12°. On overcast days, the east-west oscillation of the azimuth direction of young sunflower heads stops and the head’s normal vector remains nearly vertical but the older heads oscillate due to an innate biorythm as long as the stem grows.

Besides the domesticated and wild Helianthus annuus sunflowers, some wild relatives also have a daily east to west movement. Many other taxa have similar forms of floral heliotropism, including Chrozophora tinctoria (Euphobiaceae), Xanthium strumarium (Asteraceae), and diverse arctic and alpine species, to mention a few.

In the growing season of sunflowers, the Sun rises exactly in the geographical east and sets exactly in the west only at the spring equinox (21 or 22 March). Before/after the spring equinox, the Sun rises in the southeast/northeast and sets in the southwest/northwest. Therefore, the heliotropic immature sunflower heads face northeast at dawn and northwest at sunset. Sunflower anthesis begins approximately on the 60th day after sowing, when the inflorescence begins to open, immature flowers become visible, the inflorescence is not heliotropic anymore, and usually gets locked facing east/northeast. Leaf expansion also ceases at anthesis, when the sunflower begins investing its resources in seed production in its flowering head. The non-heliotropic mature head contributes 25% of the whole-plant light absorption.

The mature sunflower inflorescences which no longer follow the celestial motion of the Sun (left) and the tilted sunflower heads filled with ripe seeds (right) always face east. (Photos by Gábor Horváth)

After anthesis, the fruiting head bends gradually downwards due to its increasing weight and the heliotropism of sunflower leaves continues with a dampened amplitude. In the literature, the following six hypothetical explanations have been suggested for the ecological functions of the final eastward orientation of the inflorescence of mature sunflower heads:

Although many physiological details of sunflower heliotropism and nocturnal reorientation have been identified, the ecological functions of the eastward orientation of mature heads are still unresolved.

According to an idea of Gábor Horváth, professor of biological physics (Eötvös University, Department of Biological Physics, Environmental Optics Laboratory, Budapest), one of the reasons for the constant east facing of mature sunflower inflorescences can be that in mornings they receive more direct sunlight than in afternoons, because summer afternoons are usually cloudier than mornings due to stronger convection. Although this hypothesis dates back to his secondary school years, when he frequently visited sunflower plantations near Kiskunhalas (a city in southern Hungary), until now nobody has tested it. Therefore, in 2020 he involved different experts in the test of his hypothesis: Dr. Judit Slíz-Balogh, astronomer (Eötvös University, Department of Astronomy) calculated the trajectories of the Sun in the sky of the North-East-American Boone County, the region from which the domesticated sunflower originates. She also performed these astronomical calculations for Central Italy, Central Hungary, and South Sweden. Imre Jánosi, professor of physics (Eötvös University, Department of Physics of Complex Systems) determined the daily cloudiness of these geographical regions using meteorological data sets. Dr. Ákos Horváth, meteorologist (University of Hamburg, Institute of Meteorology) computed the spectrum of sunlight on the Earth’s surface as a function of the solar elevation angle. Balázs Virágh, BSc student (Eötvös University, Environmental Optics Laboratory), Judit Slíz-Balogh and Gábor Horváth measured the elevation angle of the normal vector of mature sunflower inflorescences as a function of local solar time in the growing season. Dr. Ádám Egri (Ecological Center of the Hungarian Academy of Sciences, Duna Research Institute, Budapest) together with Balázs Virágh measured the absorption spectra of the inflorescence and the back of sunflower heads. Using these astronomical, meteorological and plant-physiological data, Gábor Horváth and Judit Slíz-Balogh computed the total energy of sunlight and diffuse skylight absorbed by the inflorescence and back of mature sunflower heads between the beginning of anthesis (1 July) and the full development of seeds (7 September). Dániel Horváth (Eötvös University, Environmental Optics Laboratory) visualized the results. 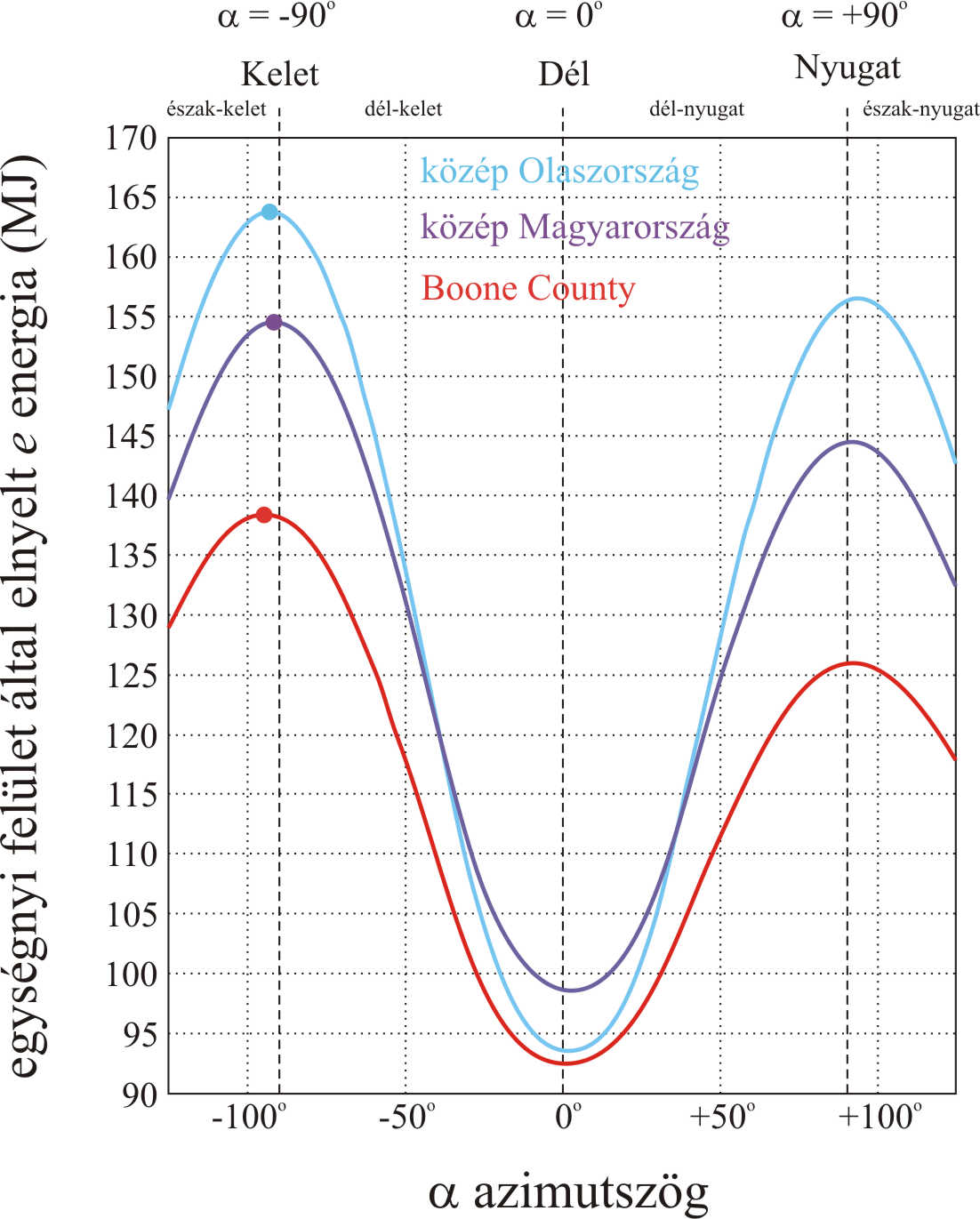 Total energy e per unit area absorbed by a mature sunflower inflorescence between anthesis (1 July) and senescence (7 September) as a function of the azimuth angle α of the inflorescence’s normal vector, computed for Boone County, Central Hungary and Central Italy. The primary maxima of the curves are indicated by dots (modified after Figure 5A of [2]).

The 10 to 50% extra light energy absorbed by an east-facing mature sunflower inflorescence compared to a west or south-facing one is advantageous for the development and ripening of the seeds. Furthermore, this surplus energy can accelerate the evaporation of dew condensed at dawn onto the inflorescence, thereby reducing the risk of fungal attack as previously hypothesized. Another advantage of this extra light energy could be that morning-active pollinators may be stronger attracted to the warmer east-facing sunflower inflorescences, as has also been proposed. Thus, the novel environment-optical explanation for the advantage of the east facing of sunflower inflorescences [2] is consistent with some of the earlier hypotheses.

The final conclusion of the Hungarian scientists is that an evident advantage of the east facing of mature sunflower inflorescences is that this azimuth orientation maximizes the light energy absorbed by the inflorescences, if afternoons are cloudier than mornings, as is the case for the origin region of domesticated sunflowers (Boone County), as well as for Central Italy and Central Hungary.

Further details can be read here.