The clock of chemical evolution 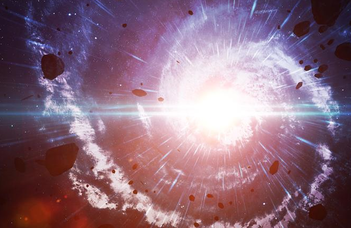 A new measurement of chemical evolution suggests that amino acids filled the early universe some nine billion years before life emerged. That has important implications for understanding the origin of life and attempting to re-create it in the lab.

Back in 1952, the chemists Stanley Miller and Harold Urey famously reproduced the conditions that existed on Earth some four billion years ago. They mixed water, ammonia, methane, and hydrogen in a sealed flask, heating it and zapping it with sparks to simulate lightning. The experiment is famous because within a few days, the flask began to fill with complex organic molecules such as amino acids, which are the building blocks of life.

The implications were clear. If the building blocks of life are simple to produce, then perhaps life itself might not be so hard to create. It raised the tentative possibility that life may arise in the universe wherever conditions permit.

Astronomers have since found evidence of the same molecules on other planets, in asteroids, and even in interstellar space.

And that raises some interesting questions. How did molecules first form in the universe, and when did the more complex ones emerge? And what does this suggest about the origin of life?

Today we get an answer from the work of Stuart Kauffman at the Institute for Systems Biology in Seattle and colleagues at Eotvos University in Budapest. These guys have simulated the way molecules must have formed in the early universe and shown how this reproduces the chemical mix that astronomers now observe in space.  The work has important implications for our understanding of the origin of life and for how we might re-create it in the lab with synthetic biology.

First, some background. On Earth, life seems to have started some four billion years ago in conditions quite unlike those that exist today. Miller and Urey reproduced these in their famous experiment.

But how did Earth come to have this mix in the first place? Astronomers can see evidence in space of simple molecules, such as water and ammonia, but also of more complex ones such as polycyclic aromatic hydrocarbons and amino acids. So how did this mix come about?

The broad answer is that the Big Bang created vast amounts of hydrogen and helium, which fused inside the first stars to create heavier elements such as carbon, oxygen, and nitrogen. And further star formation forged the heavier set of elements we see on Earth today.

But the way these elements combined to form molecules is not clearly understood. One reason is that the number of possible molecules is huge. “The number of different molecules increases super-exponentially with the size of the set [of atoms],” say Kauffman and co.

So they simplify the problem by looking only at the mass of possible molecules. This is a smaller group, and so  easier to consider, because lots of different molecules can have the same mass.

The distribution of molecules on Earth is a good starting point, because it represents the most chemically diverse environment known to science.

So Kauffman and co looked at the distribution of molecular masses on Earth, taken from the PubChem database of over 90 million molecules, the vast majority of which are natural. This distribution peaks at about 290 daltons (equivalent in mass to about 24 carbon atoms).

However, lots of different molecules have this same mass. The distribution also has a long tail of high-mass molecules measured in thousands of daltons.

Next, the researchers compared this distribution to that in the Murchison meteorite, a large, well-studied space rock that fell on the town of Murchison, Australia, in 1969.

Various analyses show that this rock contains at least 58,000 different molecules. But for experimental reasons, masses below 200 daltons and above 2,000 daltons cannot be measured, so Kauffman and co have to correct for this omission.

The distribution of mass in these molecules then follows a pattern similar to that seen in the PubChem database. The Murchison distribution peaks at around 240 daltons and has an extended tail. That’s useful because the Murchison meteorite dates from the formation of the solar system some five billion years ago, making it a snapshot of chemical evolution from an earlier time.

The key idea in this paper is that by comparing the two distributions, it is possible to work out when complex molecules must have first formed.

An important part of the puzzle is how this pattern of distribution arose. To find out, Kauffman and co study the space of all possible chemicals and show that molecules can grow in two different ways.

In the first, larger molecules form from the the reactions of smaller molecules in a random accumulation. “In this process, almost all possible small molecules and compositions get created after a certain time,” say the researchers.

However, random accumulation cannot account for the distribution of very big molecules. Kauffman and co say these must form in a different process, called preferential attachment. “For example, peptide chains or polycyclic aromatic hydrocarbons are not built via random accumulation of atoms, but predominantly from the accumulation of larger blocks such as amino acids and aromatic rings,” they say.

The key is that each process leads to a different distribution. Random accumulation causes the peak at 240 daltons from small molecules that form relatively quickly. Preferential attachment creates the long tail of larger molecules, which much form later.

By comparing the relative sizes of these two distributions on the Murchison meteorite and on Earth, it should be possible to extrapolate backwards to work out when the process of preferential attachment first began—in other words, when amino acids first appeared in the universe.

That’s exactly what Kauffman and co do. And the answer is that amino acids first appeared about 168 million years after the Big Bang, a mere blink of an eye in cosmological terms.

That has significant implications for our thinking about the origins of life. “The results suggest that the main ingredients of life, such as amino acids, nucleotides and other key molecules, came into existence very early, about 8-9 billion years before life,” say Kauffman and co.

Since the precise conditions in which life evolved on Earth took another eight to nine billion years to emerge, amino acids cannot be a sign of life potential at all, as had been thought after the Urey-Miller experiment.  “Their existence in samples is by no means an immediate precursor of life,” say Kauffman and co.

This also explains why attempts to extend experiments like Urey and Miller’s over months and years  have never yielded anything interesting. Even computer simulations of the origin of life have never yielded clear evidence of how the step can be taken from amino acids to auto-catalytic chemical networks and then to self-reproducing molecules of life.

That places some dampers on the idea that the universe could be teeming with life. Instead, biologists who study the origin of life will need to look much more closely at the special conditions in which biological—or, as Kauffman and co put it, “post-chemical”—evolution occurs. “Life’s secrets are coded in the interactions and post-chemical evolution of these molecule families,” they say.

Clearly, there is much work to be done.