The exhibition of the India Library’s new volumes 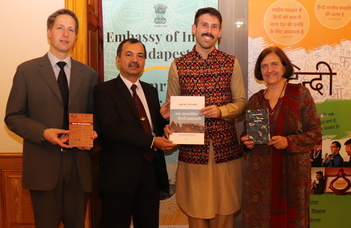 The ELTE Department of India Studies has presented the three new volumes for the India Library series at the ELTE Faculty of Humanities, 13th of November, 2019. A goal of the volumes is the translation of several types of Indian literature and the publishing of India-related studies written in Hungarian as tools which can connect the culture of India to the readership of Hungary.

The three volumes has been translated as follows: Manu’s Code from Sanskrit, Sahni Bhísam’s Darkness from Hindi to Hungarian by Bernadett Judit Borbály Indologist, Hungarian-Hindi Dictionary (Ek sārgarbhit hindī śabdāvalī) created by Péter Sági Indologist, the Assistant Lecturer of the Department of India Studies at ELTE. All three volumes has been published by the L’Harmattan Publising House with the support of the Indian Council for Cultural Relations and the Indian Embassy of Hungary.

After lighting the oil lamps based on the Indian tradition Prof. Imre Hamar the Vice-Rector of International Relations of ELTE, His Exellency Kumar Tuhin the Ambassador of India and Gábor Sonkoly, the Dean of the Faculty of Humanities were greeted the participants. In the meantime, those who were present could attend a podium-discussion regarding to the new volumes. The event was closed with a short reception with Indian food and music.

On one hand, this occasion was the closure of the publishing of the volumes, on the other hand it will be the first act as a much closer cooperation between ELTE and the Representation of India In Hungary. Organizing of the „India Day” by the ELTE Faculty of Humanities and the Department of India Studies is already in motion which will bring India’s Culture closer to those who are interested in its rich and unique culture and traits from the university in the future.