What is your dog’s human age? 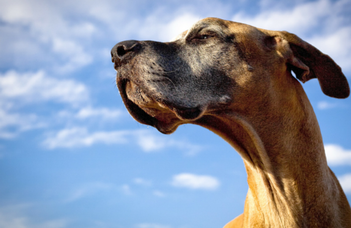 Dogs and cats age much more rapidly than humans do. However, they go through similar stages of development including puppyhood, adolescence, adult-hood, the senior years, and a geriatric phase. Life expectancy and healthspan (the period when healthy and free from serious or chronic illness) varies depending on breed and size, as well as factors like nutrition, lifestyle, and genetics.

A new study from a team of Scientists at the Senior Family Dog Project at the Eötvös Loránd University in Budapest Hungary set out to examine the link between the age and health of the dog, and a suite of different owner and dog characteristics. Some of the results were novel and surprising, including the finding that traumatic experiences, such as spending time in a shelter, changing owners and getting lost, can have long-term negative consequences on dogs’ health.

Is your dog overweight? The rise of the obese dog

“Dogs' nutritional requirements change as they age and depend on their activity levels in the same way as it does in humans. Therefore, it may come as no surprise that up to 60% of dogs in the UK are now classified as overweight or obese, a rise of around 20% since 2007, mirroring the rise in obesity among their humans. Many owners feed inappropriate foods such as table scraps as part of their dogs main meal, most do not consider their dog's life stage when selecting a diet, and some are not able to recognize when their pets are overweight or obese” – said Enikő Kubinyi, principal investigator. One way to measure obesity is to use a body condition score (see picture below).  Dogs that were classified as overweight or obese had increased odds of sensory and/or health problems in the 3–6 years and 8–10 years age groups. Obesity is now considered the biggest health and welfare issue affecting pet dogs.

The controversial question, are pure breeds or mixed breeds heathier?

This is a longstanding argument amongst dog lovers and experts alike. Mixed breed dogs are often assumed to have greater longevity, improved health and lower susceptibility to diseases than pure breeds, due to higher genetic variation. However, there has been mixed evidence so far, as pure breeds and mixed breeds seem to be prone to suffer from different diseases and illnesses. Results from the current study revealed that purebred dogs suffered from health problems at a younger age, and may die at an earlier age than mixed breeds. The oldest dog group in the Hungarian sample (>12 years) consisted of fewer pure breeds than mixed breeds and the mixed breeds sample was on average older than the pure breed sample. So at least in this population of dogs, mutts were found to be healthier.

How can you tell when your dog is old?

Just as it is sometimes difficult to tell if your dog is overweight, it can also be hard for owners to detect physiological and behavioural changes in their dogs and make changes in their daily routine in order to adapt to their dogs current needs. “The situation is complicated by the fact that the transition from adult to senior or geriatric life stage varies between individuals and their measure is entirely subjective. The terms “aging” and “old,” “senior” and “geriatric,” may mean different things to different dog owners.” – according to Dóra Szabó, PhD student. Typically, old dogs were classified more frequently as unhealthy, less often had a “normal” body condition score, and more often received medication and supplements. There were more male and neutered dogs among them, they more often suffered from health problems (such as sensory, joint, and/or tooth problems), received less activity/interaction/training with the owner, and were more likely to have experienced one or more traumatic events.

The influence of previous trauma on dogs’ health

This study is one of the first to report the long-term negative consequences of traumatic experiences on health in dogs. “Dogs that had previously experienced a traumatic event that still currently affected their behaviour were more likely to suffer from health problems. Spending time in a shelter, changing owners, traumatic injury/prolonged disease/surgery, getting lost, and changes in family structure, such as birth and death of family members were found to be traumatic for dogs. Multiple traumatic events over the dogs’ lifespan increased the risk that owners reported that their dogs currently showed behavioural signs that they attributed to previous trauma.” – reported Lisa Wallis, first author of the study. The high prevalence of dogs that were affected by one or more traumatic life events during their life in this study indicate that welfare and health could be improved by informing owners of the greatest risk factors of trauma and promoting responsible dog ownership.

Published in the journal Frontiers in Veterinary Science