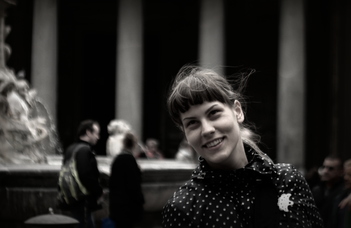 “I have learned many new things, met tons of new people and even participated in the Erasmus exchange program while studying at ELTE.”

It was one of the most natural decisions after I have decided to study in Hungary. It's not just the fact that ELTE is the oldest university, but it is also internationally recognized, with a great reputation. The fact that the diplomas issued by Eötvös Loránd University are acknowledged worldwide, also in the Republic of Slovenia, played a role in my selection.

What did you like most about being a student at ELTE?

It was a wonderful experience. The professors were simply amazing. I have learned many new things, met tons of new people and even participated in the Erasmus exchange program while studying at ELTE.

What were the challenges in your study program?

The main challenge was probably the language, since I was studying in Hungarian and I had difficulties at the beginning (although I am bilingual), but the professors were very helpful and understanding.

How do you think your degree has helped you in your life and career?

I believe an international experience like studying abroad can be really helpful and stands out in your CV, since it provides you with new experiences, new discoveries, it expands your worldview. Furthermore, the experience of living and studying in a foreign country sets you apart from the majority of other job applicants. As for the degree itself, owning one from Eötvös Loránd University, which is internationally recognized, is definitely an advantage.

Do you have any advice for future students at ELTE?

At first, I did not want to meet up with my class-mates/colleagues, but later on I realized what a mistake I made. You should definitely do that as soon as you have the chance. If you have the chance, attend Erasmus classes (even if you are a full-time student from Hungary). Explore Budapest and its beauties. It's a must.