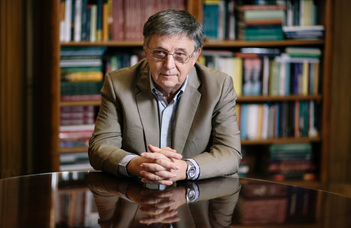 HU
The Norwegian Academy of Science and Letters has decided to award the Abel Prize for 2021 to László Lovász of Alfréd Rényi Institute of Mathematics (ELKH, MTA Institute of Excellence) and Eötvös Loránd University in Budapest, Hungary, and Avi Wigderson of the Institute for Advanced Study, Princeton, USA. This prize is often referred to as the Nobel Prize for mathematicians.

They received the prize for their foundational contributions to theoretical computer science and discrete mathematics, and their leading role in shaping them into central fields of modern mathematics.

The theory of ‘computational complexity’ – which concerns itself with the speed and efficiency of algorithms – first emerged in the 1970s and is now an established field of both mathematics and theoretical computer science. Computational complexity is now a very important field, providing the theoretical basis for internet security. Also in the 1970s, a new generation of mathematicians realised that discrete mathematics had a new area of application in computer science. Today algorithms and internet security applications are an integral part of everyday life for all of us.

“Lovász and Wigderson have been leading forces in this development over the last few decades. Their work interlaces in many ways, and, in particular,

they have both made fundamental contributions to understanding randomness in computation and in exploring the boundaries of efficient computation,”

says Hans Munthe-Kaas, chair of the Abel Committee. He continues: “Thanks to the ground-breaking work of these two, discrete mathematics and the relatively young field of theoretical computer science are now firmly established as central areas of modern mathematics.”

László Lovász was awarded a Candidate Degree of Mathematical Science (C.Sc.) in 1970, before earning his degree in Mathematics at Eötvös Loránd University (ELTE). In 1977 the Hungarian Academy of Sciences awarded him the degree Dr.Math.Sci. In 1979, at the age of thirty-one, he became a member of the Hungarian Academy of Sciences, he became a full member in 1985. Until 1975, he worked as a research assistant at the Department of Geometry at ELTE. Between 1975 and 1982 he was the head of the Department of Geometry at József Attila University in Szeged. In 1982, he returned to ELTE to teach and in 1983 he became head of the Department of Computer Science.

Besides his activities as a researcher and professor, he is the Academic Director of the AE Budapest Knowledge Hub. He was awarded numerous prizes, among others the Wolf Prize (1999), the Knuth Prize (1999), the Gödel Prize (2001), and the Kyoto Prize for Basic Science (2010). Among the Hungarian prizes, he received the Corvin Chain Award (2001), the Bolyai Prize (2007) and the Széchenyi Grand Prize (2008) and led the International Mathematical Union. He is the author or coauthor of more than 250 scientific publications and nine books.

In the 1970s, graph theory became one of the first areas of pure mathematics able to illuminate the new field of computational complexity. One of the major impacts of Lovász’s work has been to establish ways in which discrete mathematics can address fundamental theoretical questions in computer science. He has said that he feels very lucky to have experienced one of those periods when mathematics was developing in complete alignment with an area of application.

In addition to his work on the foundational underpinning of computer science, Lovász has also devised powerful algorithms with wide-ranging applications. One of these, the LLL algorithm, named after Lovász and the brothers Arjen and Hendrik Lenstra, represented a conceptual breakthrough in the understanding of lattices, and has had remarkable applications in areas including number theory, cryptography and mobile computing. Currently, the only known encryption systems that can withstand an attack by a quantum computer are based on the LLL algorithm.

Recent research of the mathematician at ELTE focuses on the mathematical foundations of large networks. In 2018, the Alfréd Rényi Institute of Mathematics, the János Bolyai Mathematical Society and Eötvös Loránd University organized a scientific conference in his honor, where the international community of mathematicians discussed topics related to his research during the five-day event.

According to him, “research is an urge, if someone truly is a mathematician, since it requires continuous thinking about problems waiting to be solved.” In an interview, he compared mathematical problem solving to the key move in chess: “Suddenly everything becomes clear and intelligible. These are the most attractive moments in a mathematician’s life. And these moments attracted me as a child as well” The world renowned scientist graduated from ELTE and he said the following about the study years here: “it was a decisive stage of my life, all thanks to my wonderful professors”

he named diligence and respect for science and the work of others as the most important values.

Besides never stopping research, teaching has a crucial role in his life: “I like teaching because teaching provides a framework for life. It also gives joy, especially if it can give talented students something that makes their eyes sparkle with excitement. I am very happy to teach the best, the researchers of the future.”

Avi Wigderson, who was also awarded the prize this year, is known for his ability to see connections between apparently unrelated areas. He has deepened the connections between mathematics and computer science. His contribution to widening and deepening the field of ‘complexity theory’ – which concerns itself with the speed and efficiency of algorithms – is arguably greater than that of any single other person. In 1994, Wigderson won the Rolf Nevanlinna Prize for computer science. Among his many other awards are the 2009 Gödel Prize and the 2019 Knuth Prize.

The Abel Prize is funded by the Norwegian Government and amounts to NOK 7.5 million (about HUF 271 million). The prize is awarded by the Norwegian Academy of Science and Letters. The choice of the Abel laureates is based on the recommendation of the Abel Committee, which is composed of five internationally recognized mathematicians.