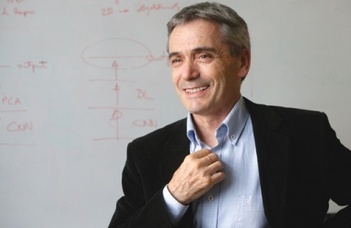 HU
András Lőrincz, senior research fellow at the Department of Artificial Intelligence of the ELTE Faculty of Informatics, received the recognition on the ELTE–Újbuda Innovation Day on 3 October. He was awarded for working out a method in the field of human–computer interaction development that can be used in the industry.

ELTE annually gives an award to the most innovative researcher of the previous year. In addition to professional recognition, this prize also entails a financial reward. The award for 2019 was won by András Lőrincz, senior research fellow at the Department of Artificial Intelligence, ELTE Faculty of Informatics. Within artificial intelligence, he focuses on human–machine interactions. Using deep learning models, he devised an industrially applicable

method in the field of human–computer interaction development through the recognition of facial expressions and gaze monitoring.

He currently holds professorship at the ELTE Faculty of Informatics. He graduated in physics from the ELTE Faculty of Science in 1975. He obtained his habilitations in laser physics in 1998 and in computer science in 2008. His main research interests are in human-computer collaboration and the modelling of thinking. He worked several times in the US collaborating with the world’s best institutions on quantum systems. Between 1982 and 1984, while engaged in building a laser system in Chicago, he found that artificial intelligence learning during experiments could be faster and more accurate than modelling calculations. As the number of unfulfilled promises concerning the effectiveness of artificial intelligence had just increased over time, he shifted towards exploring a “working system”, that is, learning the working principles of neurobiology and the human brain.

Since 1998, he has been a senior research fellow at ELTE, and has led numerous successful projects through his relations with Panasonic, Honda Future Technology Research, the Information Directorate of the US Air Force Research Laboratory, and EIT Digital in many fields, with numerous European institutions. In addition to many other awards, he won the Kalmár Prize of the John von Neumann Computer Society in 2004. As recognition of his pioneering work, he was also elected a fellow of the European Coordinating Committee for Artificial Intelligence in 2006.

On 3 October 2019, the Eötvös Loránd University’s Centre for Innovation, in cooperation with the Local Government of Újbuda, organised a conference and a start-up exhibition at the Lágymányos Campus of the university. Visitors were able to learn about the practical applications and the future of artificial intelligence at engaging educational presentations. Additionally, several organisations and programmes supporting innovation introduced themselves. As part of the afternoon session, the lecture series “Get started! Start a Business!” of the American Chamber of Commerce Hungary was brought to the university. There was an interactive roundtable discussion, as well as networking and start-up exhibitions where local start-up companies could share their best practices. The Innovative Researcher Award for 2019 was presented at this event, and winners of the student idea competition also introduced themselves.