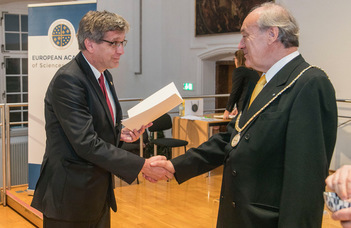 HU
Péter G. Szalay, full professor at the Department of Physical Chemistry at the ELTE Faculty of Science, has become an elected member of the prestigious European scientific organization.

The European Academy of Sciences and Arts, a non-governmental European association founded in 1990, appointed Professor Péter Szalay as a member of the society at its General Assembly held in March 2020. The event took place following last autumn’s vote of board members.

Péter G. Szalay is a Hungarian chemist holding a Széchenyi Prize. In 1986, he obtained a degree in chemistry from Eötvös Loránd University. From 1986 to 1989, he was a scholarship PhD student at the Institute of Theoretical Chemistry at the University of Vienna, where he received his doctorate in 1989. He is currently a full professor at the Department of Physical Chemistry at the ELTE Faculty of Science and a member of the Laboratory of Theoretical Chemistry. His main research areas are quantum chemistry, electronic structure theory, and molecular spectroscopy.

From the ELTE Faculty of Science, in addition to Péter Szalay, Professors Gábor Náray-Szabó and Imre Kacskovics are also elected members of the organization.

The European Academy of Sciences and Arts was founded in 1990 on the initiative of Felix Unger, a heart surgeon from Salzburg. Its members were renowned scientists and artists, initially from Austria and Bavaria. Later they also involved the neighbouring countries, and then all Europe. The Academy is divided into eight classes (I. Humanities, II. Medicine, III. Arts, IV. Natural Sciences, V. Social Sciences, Law and Economics, VI. Technical and Environmental Sciences, VII. World Religions, and VIII. Corporate and Public Governance). The association is committed to promoting scientific and societal progress. In addition to thirty-two Nobel Laureates, the Academy involves two thousand outstanding scientists and artists, mostly from Europe.