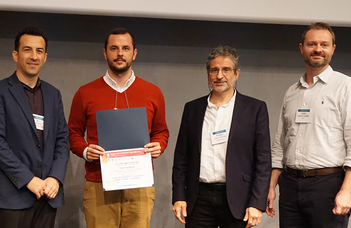 HU
Staff members of the Department of Physics of Complex Systems at ELTE won the DREAM Challenges international machine learning contest. The participants of the contest had to predict as accurately as possible the gestational age based on gene expression data obtained from the blood samples of pregnant women.

Two members of the Department of Physics of Complex Systems at ELTE – Professor István Csabai and his Ph.D. student, Ármin Bálint Pataki – won first prize at the DREAM Challenges international machine learning contest. Their task was to estimate the date of delivery based on data obtained from blood samples of pregnant women helping thus the diagnosis of prenatal complications. The second and third places were taken by the teams of the University of Michigan and Tsinghua University in Beijing at the conference held in New York.

The contest organised by DREAM Challenges had nearly 500 participants from all over the world. They had to predict as accurately as possible the gestational age based on gene expression data obtained from blood samples. The organisers provided the contestants with a total of 735 blood samples collected from 149 pregnant women.

In addition to the blood samples, some test sets also involved information about the advancement in gestation and gene expression data were also provided for training the prediction models.

Another part of the test sets, however, comprised only gene expression data, and the contestants needed to estimate the gestational age based on these data. The calculations were compared with the estimated gestational ages determined by other methods so that the results of the competitors would be measurable.

It is a basic need in prenatal care to determine gestational age. The inaccurate estimation of gestational age may lead to unnecessary interventions. Currently, the estimation of advancement in gestation is based on the last menstrual period and/or ultrasound scanning. Determining the exact gestational age by gene expression combined with ultrasound scanning can help identify more complicated pregnancies at an early stage, which can be given more focus. The next round of the competition is still in progress, and it is dedicated to this issue.