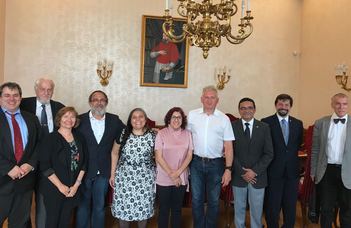 HU
Between 25 June and 6 July ABRUEM (Brazilian Association of Rectors of State and Municipal Universities) spent two weeks in Hungary representing 45 Brazilian universities of member states and municipalities with 700,000 students. ELTE took part in the programs during the visit, as well. Santos Soares, Vice-Rector of Universidade Estadual do Ceará (UECE), member of the delegation and cooperating close with ELTE, met László Borhy, Rector of ELTE on 2 July. ELTE also hosted the conference titled “Brazilian-Hungarian Relations in the Internationalization of Higher Education” on 6 July.

ELTE and FUNECE (Fundação Universidade Estadual do Ceará, the Foundation for Universidade Estadual do Ceará located in Fortaleza) signed a cooperation agreement for five years in 2015. FUNECE also initiated an agreement between ELTE and UECE in 2017 on teaching Hungarian language, literature and culture at the Brazilian university from the second half of 2017. In this agreement the participants also regulated the details of the Hungarian education at the University of Fortaleza.

During his consultation with Rector László Borhy, Imre Hamar, Vice-Rector of International Affairs and Ferenc Pál, Rector's Commissioner for Brazilian Affairs, Santos Soares highlighted the importance of the relationship of UECE and ELTE and started negotiations with the leadership of ELTE about expanding the cooperation. The Vice-Rector of the Brazilian university was accompanied by the leader of the international office of UECE and also by lecturers of the university.

The ABRUEM delegation took part in the conference “Brazilian-Hungarian Relations in the Internationalization of Higher Education – Motivations and aspects of decision in selecting foreign university”, hosted in the council hall of Faculty of Humanities at ELTE. The event was organized by the Hungarian Rectors’ Conference and the European Centre for Science, Education and Research in cooperation with Pallas Athéné Foundation for Innovation and Geopolitics and ELTE. At the event plenary presentations were held by Gábor Dobos, Study in Hungary Leader of Tempus Public Foundation, Zoltán Bács, Chancellor of the University of Debrecen and Mar Gutiérrez-Colón Plana, Vice-Rector of International Affairs of Universitat Rovíra i Virgili in Tarragona. Further presenters were Eszter Lukács, Vice-Rector for Education of Széchenyi István University, Zoltán Dubéczi, General Secretary of Hungarian Rectors’ Conference, Barnabás Kovács, Consul General, research leader representing the European Centre for Science, Education and Research, and José Celso Freire Júnior, Vice-Rector of UNESP, representing the guests.

During his stay at the Brazilian Scientific Center in Faculty of Humanities at ELTE, the president of ABRUEM and the Rector of Universidade Estadual de Santa Cruz awarded Ferenc Pál, university lecturer, the leader of the Center with a medallion for his work in the distribution of the Brazilian literature.

The event at ELTE was also the closing ceremony of the visit of ABRUEM in Hungary. The visit of the Brazilian delegation contributes to strengthening the connections between the universities and new ones can be built up. On the event on Friday many Brazilian university leaders articulated their intention of establishing new cooperation with ELTE.

The report of Hungarian Rectors' Conference about the stay of the delegation is available on this link.