The 28th annual meeting of the European Association Of Archaeologists started 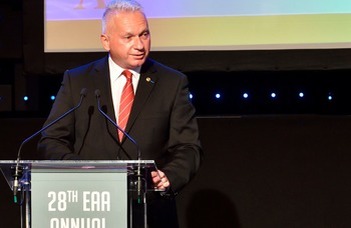 HU
Approximately 1,700 archaeologists and experts in cultural heritage protection arrived in Budapest from various parts of Europe to learn about the latest results of the discipline, as well as the culture and history of Hungary and the Carpathian Basin. The opening ceremony of the congress was held in the Castle Garden Bazaar on 31 August 2022.

“Hungary has a rich historical and archaeological heritage, which is why this conference is being held in Budapest this time,” emphasised János Csák, Minister of Culture and Innovation, at the opening ceremony that took place in the Castle Garden Bazaar (Várkert Bazár). The minister mentioned that the Eighth International Congress of Anthropology and Prehistoric Archaeology organised in Budapest 146 years ago already demonstrated that Hungary has a lot to tell and show the world due to the rich heritage and intellectual capacity of the Carpathian Basin.

At the opening ceremony, Rector László Borhy greeted the participants on behalf of ELTE, the hosting institution of the event. “ELTE has been at the service of science, education, and innovation since its foundation in 1635, that is, for nearly four centuries,” he said. “Another long-standing institution, the Hungarian National Museum (founded in 1802) was the partner of the university in the organisation of the conference. These two prestigious scientific institutions also hosted the 1876 international meeting of archaeologists in Budapest, which was opened almost on the same day, on 4 September, by Ágoston Trefort, Minister of Religion and Education. The fact that János Csák, Minister of Culture and Innovation, accepted our invitation to the conference and enhanced the prestige of the event with his presence testifies that

the investigation and respect of the past is an important issue for the government of Hungary,”

Gábor Virágos, the Deputy Director-General of the Hungarian National Museum, stressed that the 28th annual meeting of the European Association of Archaeologists bringing together archaeologists and experts in cultural heritage protection from and outside Europe offers a special opportunity to present the archaeology of the Carpathian Basin. In this connection, he called attention to the logo of the conference, which was inspired by the decorative motif on one of the ewers from the Seuso Treasure. “The pitcher can be viewed in the museum together with thirteen other large silver vessels made in the fourth century,” he said.

The main objective of this year’s meeting is that experts working in European archaeological institutions could help each other in defining important aspects of the profession and publishing their scientific findings. The EAA conferences were held online in the past two years as it was not possible to hold personal meetings.

The conference lasting until Saturday is attended by about 1,700 professionals, including many young, early-career researchers. Most of the archaeologists have arrived at the event from Spain, the United Kingdom, Germany, and Hungary, but there are also participants from several other countries, even the United States and Chile. The archaeology of the Carpathian Basin, as well as research into climate change and its social impact, are prominently featured at the conference. The detailed programme of the conference is available here.

The European Association of Archaeologists, having several thousand members, was founded in Ljubljana in 1994. Its annual meeting is held in a different major European city (usually a university city) every year. The current president of the association is Eszter Bánffy, Honorary University Professor at ELTE, who also gave a speech at the opening event. This year’s conference held in Budapest is hosted by the Eötvös Loránd University (ELTE) in cooperation with the Hungarian National Museum (HNM) and Castle Headquarters Nonprofit Ltd.

Eszter Bánffy, Honorary University Professor at ELTE
and President of the European Association of Archaeologists

The opening ceremony was featured by the Pro Musica Hungarica Mixed Choir of ELTE. The conference continues with scientific sessions on 1 September. Nearly 2,000 papers are to be delivered in 199 sessions.