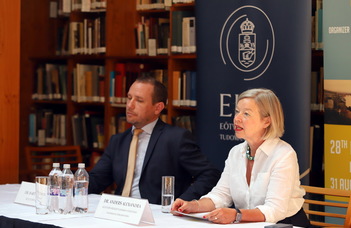 HU
Approximately 2,100 archaeologists from over sixty countries are expected to attend the conference. The press conference where the event was announced was held on 20 July 2022 in the Library of the Institute of Archaeological Sciences at ELTE Faculty of Humanities.

At the press conference, Dávid Bartus, Dean of ELTE Faculty of Humanities, said that the meeting would be hosted by Eötvös Loránd University in partnership with the Hungarian National Museum and Castle Headquarters from 31 August to 3 September. This prestigious international event aims to present the latest research results in the field of archaeology and cultural heritage protection. Hungary has numerous archaeological relics beginning with prehistoric finds, and this conference offers an excellent opportunity to present them to an international audience. He emphasised that, in addition to the scientific sessions, the programme also includes many social events, which provide opportunities for networking.

The European Association of Archaeologists (EAA) – the current president of which is Eszter Bánffy, full professor at ELTE – bringing together nearly 3,000 archaeologists was founded in 1994. The annual meeting of the association is held every year in a different major European city (usually a university city). “It is a great pleasure and recognition for us that this year Eötvös Loránd University can welcome archaeologists from all over the world. After almost 150 years, this is the first major archaeological conference to be held in the capital of Hungary,” said Alexandra Anders, senior research associate at the ELTE Faculty of Humanities, chairperson of the organising committee.

The event will be attended by archaeologists arriving predominantly from Spain, the United Kingdom, Germany, and Hungary, but there will also be delegates from the United States and Chile. The opening ceremony will be held at the Hungarian National Museum and Várkert Bazár (Castle Bazaar) on 31 August, while the scientific events will take place between 1 and 3 September.

For Hungarian archaeologists, two of the topics are of particularly great importance due to their local relevance. One is the presentation of how various peoples were integrated into the Carpathian Basin, and the other is the discussion of recently discovered relics of the Roman Empire.

Budapest is situated along the limes, on the border of the Roman Empire and the ‘Barbaricum’, and in the Carpathian Basin, which can be compared to a reservoir,

the geography of which is defined by two major rivers and the largest lake in the region. “In both topics, several Hungarian research projects have resulted in wonderful achievements” emphasised Alexandra Anders. “In Roman Brigetio (Komárom/Szőny), the excavations carried out by ELTE go back three decades. The opening lecture of the conference will be given by László Borhy, Rector of ELTE, on the excavations started by him (and continued under the supervision of Dávid Bartus).

In addition to the big issues of archaeology, other current topics will also be addressed at the conference, such as climate change and its impact on archaeology and society. Lots of ELTE students will participate in the event as volunteers.

The graphic solutions of the conference logo were inspired by one of the pitchers of the Seuso Treasure preserved in the Hungarian National Museum: the lines pointing towards each other and, at the same time, standing apart symbolise the independence and connection of the researchers. The colour was also consciously selected: yellow suggests a friendly welcome and the joy of meeting, while green points to sustainability – and the event is being organised with the smallest possible ecological footprint. The message of ‘(Re)integration,’ the motto of the conference, refers to both the restoration of the unity of archaeology, museology, and heritage protection, and the possibility for international researchers to meet again in person after the pandemic.