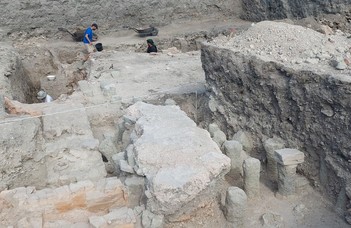 HU
The excavations of the bathhouse of the Brigetio legionary fort discovered last year are continued. This year, archaeologists are working on an area of 600 square metres, and they are already able to tell the precise age of the building based on the stamps of the floor heating system.

Ancient Brigetio (today’s Komárom-Szőny), is among the most important archaeological sites in Hungary. One of the two Roman legionary forts of Hungary is found there. The ELTE Department of Classical and Roman Provincial Archaeology and the György Klapka Museum of Komárom have been conducting excavations at the proposed World Heritage Site since 1992.

The Thermae Maiores (i.e. the bathhouse belonging to the Aquincum legionary fort) has been known since the late nineteenth century and it can also be visited. In Komárom, the ruins of the bathhouse were discovered in the summer of 2021, which was last year’s archaeological sensation. This is partly because the ancient Roman baths served primarily as public spaces. In addition to being sanitary facilities with surprisingly small pools, their halls with massive walls, underfloor heating, and valuable wall paintings served as venues for social life, exercises, feasts, and even surgeries. Consequently, they can reveal a lot about daily life at the time of Antiquities.

Last year, archaeologists started work on 650 square metres and uncovered most of this area. This year, they are working on an area of 600 square metres. The ruins of ancient buildings are today identified with ground-penetrating radar, magnetic instruments, and aerial photographs, and thus their entire floor plan often becomes visible. Based on the radar images, the bath discovered in Komárom covered at least six thousand square metres.

“Roman bathhouses had three main parts, and it is no different here, either,” Associate Professor Dávid Bartus, the supervisor of the excavations, told the newspaper 24 óra. “There were sections with cold, hot, and tepid water. Last year, we excavated a cold-water area in the northern part, and this year we are also exploring another pool. We found its channel, through which the sewage was let out, as well as a four-metre-long lead pipe that led water inside and remained completely intact.’

by archaeologists. They have also found, for example, a strigil, which is a tool with a curved blade made of bronze. The Romans used this tool to cleanse the body by scraping off dirt and oil applied before bathing. The discovered containers made of iron and bronze were used for keeping ointment or oil in them. Additionally, fragments of armour, pottery, and seventy-five coins have been found, which could have been hidden before a raid launched by the barbarians. Half a footprint left by a soldier’s hobnailed military sandal-shoes has also been preserved by one of the bricks. Some of the recently discovered finds will be stored in the new building of the Klapka György Museum in Komárom.

“From a professional point of view, the most important thing is to be able to tell precisely the date when bathhouse was built,” emphasised Dávid Bartus. “In one of the rooms of the bathhouse, at the underfloor heating system, we discovered rectangular stamps with the name of the Legio XI Claudia. It is known that this legion was stationed here between AD 101 and 105. Consequently, the bathhouse was also erected in those years.”

An open day will be held at the excavation site in mid-August, and all those interested are welcome to visit.