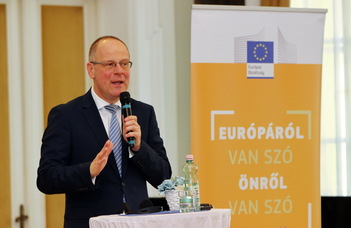 HU
What will be the Europe of our future like? Why are the parliamentary elections in May highly important? Towards what directions can the national education policy evolve? Among others these where the key topics of the Citizens’ Dialogue between Tibor Navracsics, Commissioner for Education, Culture, Youth and the students of Budapest and Milano in Aula Magna.

The students of the University of Milano were taking part in the event of the Citizens’ Dialogue in Budapest via live video connection. During the discussion the students from Budapest and Milano had the chance to express their opinions through an online application in different topics, and they could ask questions to Tibor Navracsics as well.

Rector László Borhy in his opening speech mentioned that he is very proud of the international connections of the university in Europe including more than 1000 Erasmus-partnerships.  In January 2019 the Charm European University (Charm-EU) was introduced as well, which was also signed by ELTE, and this dialogue between the EU commissioner of Hungary and the citizens of the university can be the glad contribution of ELTE to the development of the European higher education.

Monica di Luca, the international vice-rector of the institution in Milan emphasized that the University of Milan is engaged in the case of the European Higher Education and is glad to support every initiatives which treats the challenges of the system with coordinated exchange programs and the utilization of the synergy between the member states. She pointed out

Massimo Gaudina, the Head of the North-Italian Representation of the European Commission talked about his hope that similar, productive dialogues can contribute to the overcoming of skepticism against the EU and bridge the gap between the institutions of the Union and the citizens.

It turned out from the first online voting that the participants think the biggest challenge is youth unemployment, the narrowing number of job opportunities. Tibor Navracsics explained, the Commission accepted many policy documents laying down those basic principles inspiring competitiveness which can help to handle the problem. In the next few years even bigger emphasis will be put on dual programs and the improvement of digital literacy (technological development and its effects on the culture and language), business competences (cooperation, culture of debate) and social skills (devotement to democracy, autonomous personality development, tolerance).

The EU-Commissioner mentioned in one of his answers that the national education policy needs to be strengthened on two points. On one hand the accessibility of the system needs to be improved as the Hungarian schools often conserve the social differences, lack the contribution to the social inclusion of underprivileged groups which results in the emerging number of students leaving school early. On the other hand the low level of language knowledge of young people is still a serious problem which is intended to be solved by the ambitious plan of the government sending high school students to language courses in foreign countries. The answer of the Commissioner to the question, which foreign practice could be a good example to the Hungarian system, maybe was surprising to many as it wasn’t the conventional Finnish, Estonian example. Even though it is not widely acknowledged that Portuguese students have salient results on the PISA-measurements, he claimed that

the educational system of Portugal contains many elements we could adapt, as it is predictable, stable and always improves its previous results.

The students also had questions about voluntary work. Navracsics told that it is not only useful because of the economical aspect, but can be the best form of social cohesion and the promotion of European values. He raised awareness to the different actions of the European Solidarity Corps, which give the opportunity to those between 18-30 to participate in professional projects serving the common good in their own country or foreign countries.

During the conversation the Erasmus+ program was frequently mentioned. Tibor Navracsics called the program the most important element of the European education policy, the human face of the integration. He highlighted that in the next 7-year long cycle it is the only program which will receive doubled amount of financial support due to the recommendation of the European Commission -in agreement with the member states-, in spite the fact that the budget will be shortened by 8-10% after the exit of Great Britain.  The network of Erasmus is bigger than the network of the EU containing not only 28, but 33 countries. The Discover EU program provided free of charge travelling opportunity to almost 40 thousand young people, according to the feedbacks the first international experiences can positively affect the participation in exchange programs later on as well.

the migration and the global warming are above the level of the member states and demand EU-level decision making.

In the closure he emphasized his belief that today’s education will define tomorrow’s society and he hopes that the debates about Europe’s future can contribute to the common goal of making the Union the community of communities.

On the event also participated Imre Hamar, Vice-rector for International Affairs, Gábor Zupkó, Head of the Hungarian Representation of the European Commission, and István Perger, Deputy Head of Representation. The moderator of the event from the side of ELTE was Ferenc Takó, the Head of the International Strategy Office and from the Italian side Nicola Pasini, associate professor.