The legal culture of the different legal systems should be preserved 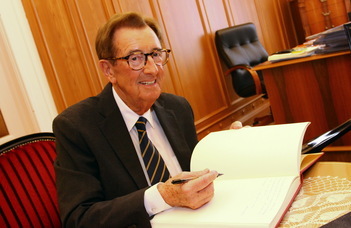 Interview with professor Dr. D. h.c. mult. Rudolf Welser (University of Vienna). Professor Welser is one of our new honorary doctors in 2019, the Senate of the University hands out “Doctor et Professor Honoris Causa” awards at the General Assembly (Pázmány Day) in May.

Professor Welser, you graduated in law in 1963, and you received your habilitation seven years later. What circumstances helped you reach this important milestone in academic career in such a short period of time? Was your interest focused on civil law from the very beginning?
Although I started working as an assistant lecturer at the Department of Civil Procedural Law, I have always been interested in civil law. That is why I changed department in 1964, and became a senior associate at the Department of Civil Law headed by Professor Kralik. At first, I focused on extremely complex topics, particularly falling in the field of tort law, such as “indirect damage” and “the purpose of standards of protection, but I was not satisfied with my results. I was once invited to a seminar held by several professors, where I gave a lecture about the liability of unauthorized agents and the issue of blame in connection with contract making. I worked for about three months on the text of the lecture. After delivering my paper, the professors present told me that its slightly extended version could be submitted as a habilitation thesis. As a result of this work, I received my habilitation, and became an associate professor of civil law at the age of thirty. From the aspect of my academic career,

it was an important factor that at that time there were some distinguished professors in my field, from whom I could learn a lot.

Furthermore, we formed a major group of lecturer assistants, we were extremely highly qualified, very interested in our field and always ready to exchange views. We all benefited from this.

The law faculties of several Austrian universities would have heartily welcomed you among their professors. You finally started to work at the University of Vienna and stayed here. What made you choose the Viennese Faculty of Law?
The Viennese Faculty of Law has always been the leading institution of law in Austria. Consequently, it is the dearest ambition of every professor to work there. In my place, anyone would have chosen Vienna if they had received an invitation.

What relationship do you have with Hungarian lawyers, with special regard to ELTE Faculty of Law?
I know a lot of law professors teaching at Hungarian universities, and I have given lectures at Hungarian universities, as well. I am particularly proud to call Professor Lajos Vékás, the former Rector of ELTE, one of my best friends. He is one of the most renowned legal scientists in the world, the doyen of private law in Hungary, and the father of the New Hungarian Civil Code. He is one of the most prominent members of our Viennese working group functioning at the research institute headed by me. We study the European law development and private law reforms there. Our working group involves four more Hungarian professors. With regard to the historical and current relationship between the law faculties of Vienna and Budapest, the University of Vienna has recently conferred Doctor et Professor Honoris Causa title on Lajos Vékás. 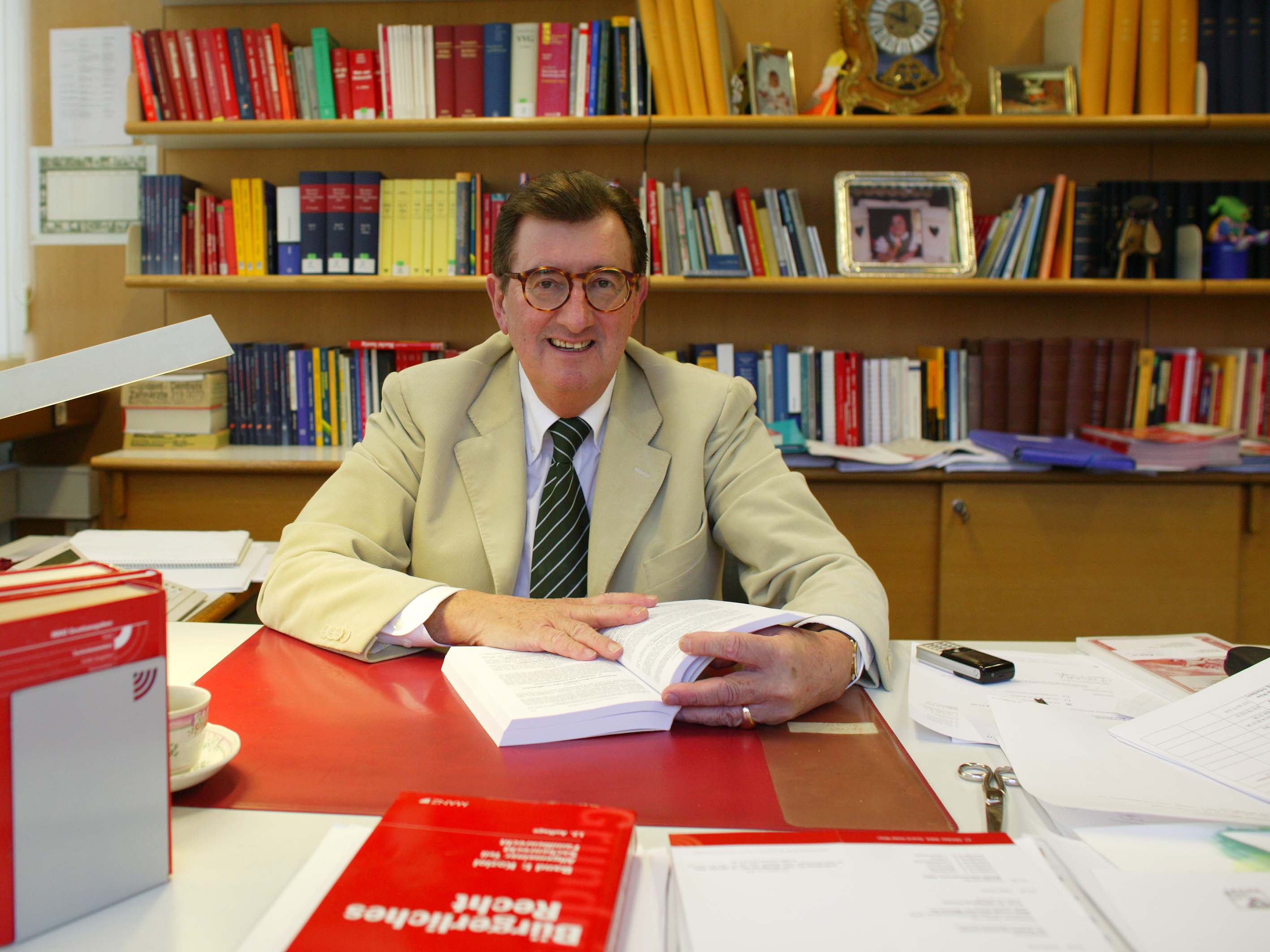 The Grundriß des bürgerlichen Rechts [The fundamentals of Civil Law] by Helmut Koziol and Rudolf Welser is still consulted for defining the concepts of the general part of Hungarian civil law. Almost all Hungarian – and as far as it can be judged, Central and Eastern European – textbooks and monographs on civil law refer to this work. On which field of law do you think your work had the greatest impact in Central Europe, and within that, in Hungary?
Our two-volume textbook has reached 15 editions in the past 50 years and has been printed in over one hundred thousand copies. Its importance for a foreign country primarily lies in that it offers readers a necessarily detailed overview of the fundamentals of Austrian private law, the doctrine on legal transactions, contract law, tort law, and other areas of law, which makes it possible to make a good comparison with other legal systems. Additionally, international integrations are getting closer today, so one must often need to get information quickly about a foreign legal system. Our reference book enables this to be accomplished almost completely, in a clear and easily understandable manner. In context of the Central and Eastern European states, we also need to mention their close relationship with our Austrian private law system, which in large part have to do with the fact that in these countries the Austrian Civil Code (ABGB) was in force for a shorter or longer period of time. It still has its effects to the extent that one can sometimes find direct information about its own legal system in our textbook.

You also published books on legal issues with humorous titles, such as Recht lustig [Funny law] and Grammophon ist kein Vorname [Gramophone is not a first name]. What motivated you to write these books and what kind of content is associated with these humorous titles?
I have been attracted to cheerfulness and humour since my childhood, and I generally take notice of oddities and curiosities. I have also discovered some extremely amusing details in legislative acts, court judgments, and textbooks.

With my books, I wanted to show the public as well that law is not only a rigorous and serious thing, but occasionally one can also laugh at it.

My audience also does that during my readings, often with some gloating in it. In other books, like the one titled Böses über die Juristen [Wicked stories about lawyers] I write about my own profession in a somewhat humorous, satirical manner.

Some of your books are also somehow connected to the Vienna State Opera, as well as television and radio recordings. What makes them so popular?
I regularly wrote during the Vienna State Opera program, in a surprising, unusual way. “I turned a blind eye” and considered the stage events strictly from a legal perspective – of course, with quite grotesque results. Nevertheless, people liked them, similarly to the presentation and evaluation of the Das jüngste Gericht [The Last Judgment], which was published in the Resonanzen [Resonances] connected to the programme of the Konzerthaus Vienna. I also gave many readings from my books, often for an audience of hundreds of people. Some of these events were recorded and could be seen in television or heard on the radio.

Do you see a future in private-law cooperation in Central and Eastern European countries?
I can not only see a future in this, but I have been actively engaged in for more than ten years now. The aforementioned working group headed by me has approx. 25-30 members, mainly professors from CEE-countries. Every year, we focus on a general topic, which we later discuss at a conference held in Vienna or abroad. Every participant provides a scientific contribute to the conference. The language of the conference is German, not English. We focus on similarities between our legal systems, most of which go back to the Austrian Civil Code (ABGB).

We also want to demonstrate that besides the vast Anglo-Saxon legal family, the EU also has other legal families, the legal culture of which ought to be preserved.

In your opinion, what is the greatest achievement of the Austrian Civil Code that is still relevant at a European level?
The original version of the Austrian Civil Code (ABGB) already comprises a number of regulations that seem quite modern even today. For example, the full equality of all nations and of sexes, and – so far as it was practicable among contemporary political circumstances – of relatives born in and out of wedlock. However, it is of crucial importance that the Austrian Civil Code is rooted in the European Enlightenment. Consequently, this law derives from human sense, which led to “rational natural law”. This is perception of law, often appearing in the so-called human rights today, may continue to provide a solid basis for legal development in the future.