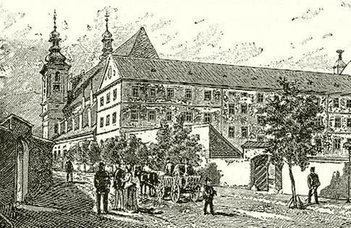 The predecessor of Eötvös Loránd University (ELTE) was founded in the rural town of Nagyszombat (today: Trnava, Slovakia) in 1635 by Cardinal Péter Pázmány, as a catholic university for teaching Theology and Philosophy. In 1770-1780, the University was transferred to Buda and later to Pest, and with the support of Maria Theresa, the Empress of Austria and Queen of Hungary, became the Royal Hungarian University.

Over the following decades, new faculties were established to meet the expectations of a learned society. In the second half of the 19th century, the University developed into a centre of modern higher education in today's sense, covering nearly every scholarly field.

In 1950 the university was reorganized and adopted its present name. It was named after one of its professors, the world-famous physicist, Loránd Eötvös.

Recently, a new campus has been built on the scenic banks of the Danube. This campus, Lágymányos Campus is now home to three faculties: Faculty of Informatics, Faculty of Science, and Faculty of Social Sciences.

Over the last hundred years, Eötvös Loránd University (ELTE) has had many world famous scientists and four Nobel Prize laureates among its teachers and alumni. The current number of students enrolled yearly has reached 33,000, and there is an academic staff of 1,800 highly-qualified teachers and researchers.

Read more about the history of the university