Insight to the work of ESN ELTE - Interview with the president, Márk Csányi II./II. 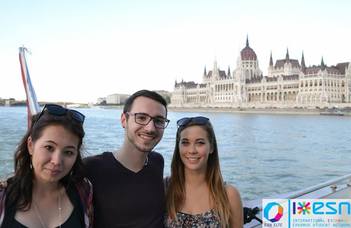 Erasmus Student Network is the biggest student organization in Europe, now we can have a slight insight to their work through the eye of Márk Csányi, president of the section of ELTE. After getting to know more about the organization in general in the first part of the interview, now we can see a bit more about the personal experiences of Márk, who have been in many positions in the team during the last four years.

How did you start at ESN ELTE?

In my freshmen camp in 2014 there was also a professional part of the program where the student organizations had the chance to introduce themselves. Back then ESN ELTE was part of the Foreign Affairs Committee within the Students’ Union and the chief mentor summarized the activities of the organization. That time I studied at the International Relations degree program, so I wanted to be part of an international environment. In September I applied to be a mentor and I had been doing it for 1.5 years. In the first semester mentors do not deal with one specific incoming student yet, but they are paired up with a more experienced mentor who helps them and they visit our events and trainings. From the second semester they get an incoming student, too. I don’t think I was a good mentor. My first exchange student was a Lithuanian girl, but she asked for help only at the beginning and later disappeared, she did not need any guidance. My second exchange student was a Spanish girl and I was very enthusiastic this time as I can speak Spanish, but usually Spanish students have a strong bonding with each other so after a while she did not need my help either.

Maybe because of this, I got involved more in the organization itself and took part in the organization of the programs. When I visited the events, I got to know the working groups better and finally I applied to the position ESN ELTE Event Coordinator and I spent a year there.

What do you like most about being a member of ESN ELTE?

The openness towards each other. During my university studies I could not really get to know my Hungarian fellow-students, but the international students are very open from the first minute and they are bonding strongly with each other; it is much easier to get closer. The other thing is specific to ESN ELTE, as we get on well with each other very well, too. Almost all of my friends are members and I got to know them here, at ESN ELTE. We work together every day and often meet in our free time; for example, we go to the cinema together. I think this is ESN ELTE specific as I’ve already heard from other ESN sections in Europe that they do not have this level of closeness in their team.

Is this similar with the mentors, too?

When I used to be a mentor, we also met in our free time. There was a small team at the faculty who built a close friendship. The mentor camp is a really good opportunity to get to know the mentors from other faculties and hang out with them, too. Obviously the board and the coordinators spend more time together, but there is a big turnover. There are always new people joining the ESN ELTE Board and we also have a good relationship with the mentors. There is no separation between the Board and the mentors. Also, former ESN ELTE members often come back to hang out with us.

What is the biggest challenge for you in being attached so much to ESN ELTE?

At one point I noticed that I did not concentrate on my exams enough at the university, but since then I focus more on the exams, as well. Of course I had some negative feedback in my private life, too, about having too little time for my friends. It is bad to hear things like these, but it also helps to keep the balance between different areas of my life. So time management is the most difficult issue. In connection with my studies, I still feel that although I do my best to focus on it and to meet the expectations, I still could do more if I had more time.

Would you tell the most memorable moment attaching you to ESN ELTE?

I can tell you two. We have a Speed Dating event at the start of every semester with about 250-300 international students who have a few minutes to talk to each other in pairs and then they are changing seats and moving on to talk to another student. It was an amazing experience to be there in the crowd and listen to 300 students laughing and talking to each other. It is also in connection with the openness towards everyone from anywhere that I have already mentioned.

It feels good to be in that environment and meanwhile I always think that this is why we are here, this is the mission of ESN ELTE.

Our national assemblies are also memorable. For outsiders they may seem to be boring as we have sessions from 9 am to 7 pm. But it feels really empowering both individually and professionally to brainstorm there together, make plans for next year and evaluate past events and successes. You meet a lot of new and interesting people and especially with former ESN members we talk a lot about how much ESN gives us. Because we often experience that the world outside ESN is different from this open atmosphere and when we have to face it after leaving ESN, we meet relatively few people who are like ESNers and it can be disappointing.

There was a chief mentor a while ago who decided to quit her position and focus on something else. Then she joined us for one of our national assemblies the first time during her work at ESN and at the end she decided to stay because she took over the enthusiasm of the others and wanted to be active again. Fortunately there are four assemblies like this each year and in case we would lose some motivation meanwhile, these events inspire us again and again.

First part of the interview